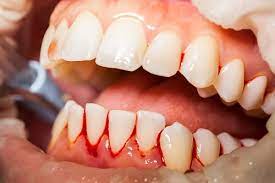 Even though taking care of your teeth is essential, many people forget how important it is to take care of your gums as well. They are the most critical part of a healthy mouth, and if you don't take care of them, you risk your oral health. Since your gums help keep your teeth in place, take good care of them and do something if you notice that they are bleeding. Well, don't panic just yet. There are many reasons why gums bleed. Some are easy to fix by making small changes to the way you live, while others will require a trip to the dentist. We have listed some of the most common reasons and treatments for bleeding gums that should help you.

Here are some of the main causes of bleeding gums:

Strenuously brushing your teeth doesn't make them cleaner. Instead, it makes you more likely to have receding gums and bleeding gums. Change how you brush your teeth and choose a toothbrush with soft bristles.

Plaque buildup at the gum line is the main cause of bleeding gums. If this isn't taken care of, it will lead to gingivitis, or inflamed gums, where the gums become swollen, sore, and bleed when you brush or floss. If gingivitis isn't treated, it can lead to gum disease, which is one of the main reasons adults lose teeth.

About half of pregnant women have gums that are swollen, red, sore, and bleed when they brush or floss. This happens because the body's response to the bacteria that can cause gum disease changes when a woman is pregnant. Take care of your gums and teeth while you're pregnant by brushing them twice a day with fluoride-containing toothpaste and flossing every day.

People with liver disease, problems with how blood clots, anemia, leukemia, and temporal arteritis are more likely to have bleeding gums.

Some of the components of processed foods can be irritating to the gums, which can lead to bleeding gums. Steer clear of processed and sugary foods and go for a diet that's high in calcium, vitamins A, K, and C, and magnesium instead. This will help you maintain a healthy balance in your diet.

Dentures that do not fit correctly can result in bleeding gums if they scratch the gums and cause ulcers by rubbing against them. Denture wearers who do not remove their false teeth before going to bed are at an increased risk of developing bleeding gums. Additionally, if you wear dentures, it is of the utmost importance that you brush your teeth and clean them thoroughly to avoid the accumulation of plaque and inflammation of the gums.

Here are the best treatment for bleeding gums that you must know:

Make sure that you are brushing your teeth with a toothbrush that has gentle bristles. If you brush your teeth twice a day for a minimum of two minutes each time, you will be able to stimulate your gums, strengthen the tissues, and stop your gums from bleeding. Flossing helps remove plaque and food particles that have become stuck along the gum line, both of which can otherwise cause bleeding gums if they are not removed. Enhancing the technique of flossing and replacing the toothbrush at least once every two months are both critical factors in maintaining healthy gums.

Maintaining good oral health can be accomplished by taking antibiotics or using an antiseptic mouthwash. Antibacterial mouthwash, paste, or oral gel can be used to assist you in fighting the beginning stages of infection and avoid bleeding gums in the event that the gums have become somewhat swollen but are not yet bleeding.

Maintaining good oral health can be accomplished by taking antibiotics or using an antiseptic mouthwash. Antibacterial mouthwash, paste, or oral gel can be used to assist you to fight the beginning stages of infection and avoid bleeding gums in the event that the gums have become somewhat swollen but are not yet bleeding.

When you rinse your mouth with warm salt water regularly, it kills bacteria and stops your gums from bleeding. If you're bleeding because of an injury or accident, rinsing your mouth with a saltwater solution cleans it and gets rids of bacteria that could cause wound infection.

Harmful bacteria in plaque can cause more problems than just gingivitis, like weakening of the tooth enamel. Your dentist will clean your teeth twice a year to eliminate plaque and tartar that you can't get rid of at home. This will help keep your mouth healthy and stop your gums from bleeding. At least twice a year, you should go to the dentist to have your teeth cleaned and checked. This can help keep gum disease from getting worse when it starts out mild.

6. Say no to Smoking

Tobacco smoking is also connected to gum disease, leading to tooth decay and bleeding gums. If you smoke, you are more likely to get severe gum disease, as smoking lowers your body's ability to fight off plaque bacteria.

Besides these ways to stop bleeding gums, you should brush your teeth every day, especially after eating sugary or processed foods. Ensure you brush your teeth gently, so you do not hurt the soft gum tissue. Eating yogurt, green tea, soy, garlic, and other similar foods could also help keep your gums healthy. Make sure your mouth is healthy and your gums don't bleed.

A. Healthy gums are generally pink. If your gums are red and swollen, then it might lead to bleeding gums.

Q. Which vitamin is best for gums?

A. Vitamin C is the best for your gums.

Q. When should I be concerned about bleeding gums?

A. If your bleeding gums keep getting worse, you should be worried. If the bleeding doesn't stop even though you're taking good care of your teeth, you should see a dentist. This will give your dentist a chance to treat gum disease or periodontal disease in its early stages, before it worsens.

A. Bleeding gums usually suggest gum disease, which a dentist can cure. They may do scaling and root planing to eradicate gum infection.

Also Read: How To Treat Swollen Gums With Braces?