Is It Offensive Or An Exaggeration? The Myntra Logo Change Issue 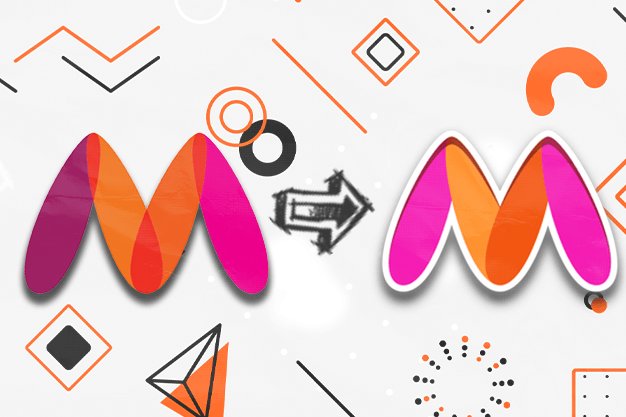 If you have been on any social networking websites in the last few days, chances are that you have heard about how the e-commerce company Myntra logo change issue based on certain allegations. There was a complaint that the previous logo could be seen as offensive to women, after which the company created its new logo. This change has come unexpectedly for the general public and has sparked a variety of discussions.

Whether the allegations were valid or not is up for debate. We are sure that you must have some opinions on this as well, just as the rest. But before going into them, let’s get the basic facts down.

What Is Myntra Logo Change Issue?

The first half of this case is made up of Myntra, the e-commerce company which is one of the biggest Indian sellers for fashion and lifestyle products. Initially started in 2007, the company was then acquired by Flipkart in May 2014. From then on, the platform has only grown through its website, selling a variety of clothes, accessories, home decor items, etc.

Clearly, this is a powerful company with a well-established reputation which has remained untainted for years. However, in the last couple of months, someone spotted a minor ‘dent’ on the pristine clear image of Myntra, which was brought to light recently.

A complaint against Myntra’s logo was first filed in December 2020, alleging that it could be interpreted as being offensive and vulgar towards the image of a woman.

The second half of this made of Naaz Patel who is the founder of the Avesta Foundation NGO. In December 2020, Patel filed a complaint regarding the presumed offensive nature of Myntra’s logo with Mumbai Police’s Cyber Crime department. Additionally, she also discussed the issue on social media across various forums.

If this appears confusing to you, then allow us to explain. To the normal viewer, Myntra’s old logo has a rather innocent appearance, with different hues of pink and orange intersecting each other to make up the letter ‘M’. However, certain activists claimed that this logo could also be interpreted to be resembling a naked woman.

When seen from that angle, the angles of the letter ‘M’ appear to be resembling the spread legs of a woman, exposing her vagina. Thus, this was seen as rather vulgar and the complaint asked the company to change the same.

Mumbai Police’s cyber cell investigated the matter after this claim. “We found that the logo was offensive in nature for women. Following the complaint, we sent an email to Myntra and their officials came and met us. The officials said they will change the logo in a month’s time,” Rashmi Karandikar, DCP of the Mumbai Cyber Crime Department, told Jagran English on Saturday.

Hence, after the meeting with the police, Myntra agreed to change the logo. This was seen as a triumph by some and met by the confusion of many.

The new logo resembles the previous one to quite an extent as it still bears the shape of ‘M’. However, the placement of the orange and pink shades has been changed to resolve any vulgar interpretation. The company has begun the process of replacing the old logo with this new version across all media, from its website to even physical packaging.

This change was met with joy from the Avesta Foundation NGO as seen in their celebratory tweet. The tweet congratulated Naaz Patel for doing what seemed “apparently impossible” and thanked Myntra for “addressing the concerns and respecting the sentiments of millions of women”.

Congratulations to our founder. She did it what apparently seemed impossible. Thank you everyone for your support. We're overwhelmed by the response. Kudos to @myntra for addressing the concerns and respecting the sentiments of millions of women. 🙏 pic.twitter.com/Iwb4e3LoLq

Clearly, for them, it seemed to bring about a sense of achievement. However, this sentiment was not reflected by the general public when they found out about the news.

You would think that the matter would come to an end after the company listened to the complaint so peacefully and resolved the matter quickly. But what happened was the opposite of that. As soon as social media caught wind of this issue, there was a flood of reactions, ranging from exasperated tweets to ironic memes.

Many people were sceptical about the validity behind the claims. After all, no one had found the logo to be offensive for so many years. This sudden allegation came as a surprise and was found to be somewhat of an exaggeration by many. There were those that expressed distaste towards those who made this an issue, while others suggested that the same attention should be paid towards actual problems which truly affect the lives of women.

Of course, lots chose to be funny and take the path of jokes and memes, instead.

I have spent the whole afternoon staring at the Myntra logo to get offended. I have failed. 😶 Will try again in a bit.

Everybody is talking about Myntra logo, meanwhile Gmail logo:#MyntraLogo pic.twitter.com/bMGQC5KRma

The True Essence of Feminism

It is obvious that there was a storm of opinions in the aftermath. While many just found the whole situation ridiculous, there were some genuine discussions about how issues like this could possibly give feminism a bad name and cause actual problems to be dismissed under the claim of feminists being ‘too sensitive’.

It is true that there have been several instances of the female body being objectified across media types, but whether this is one of those situations is a matter that remains up to interpretations. It is true that there are many other cases, such as certain lyrics, games, advertisements, or movies, where one does not have to dig this deep to come up with a problem. Perhaps the same energy could be directed towards such situations so we can progress to be a kinder society.

At the end of the day, one must keep in mind that the interpretation of art is always subjective. The original intention of the artist or graphic designed cannot be assumed to be the same as what a viewer interprets. This goes beyond the current situation and is something which we should all keep in mind in the future. After all, creative freedom is important as well and if it does not intentionally attempt to strip someone’s dignity, then perhaps we should be extra careful when assuming things.

Of course, this situation is already over, so we can only look back and form our opinions on the same. The most essential thing that we should remember is that the core of feminism is to bring equality across the genders, to ensure that women get access to all basic rights. Whether this issue is valid or not, it does not change the fact that there are still many fights waiting to be fought. We need to step out against abuse, female infanticide, victim-blaming, the rights of sex workers, being inclusive towards transgender and non-binary individuals, etc.

It is true that the position of the woman in society is vulnerable. It is for this very reason that we must focus on the issues which truly affect the everyday lives of women so that we can bring about necessary change. It would be good to keep this mind once this matter dies down and there are still actual discussions waiting to be had.

So, what is the conclusion? Well, it is really up for you to decide. If you found Myntra’s previous logo to be a problem, then you can rejoice the fact that it has been changed. If you only found about the situation recently and did not agree with it, you can focus your frustration towards the important mattes. And if you are somewhere in the middle, you can alternate between being surprised and having a good laugh.

If you want to share your thoughts about the matter, you can always do so right in the comments. We are here to encourage discussion so that we can move on from such incidents as much smarter, kinder and funnier!