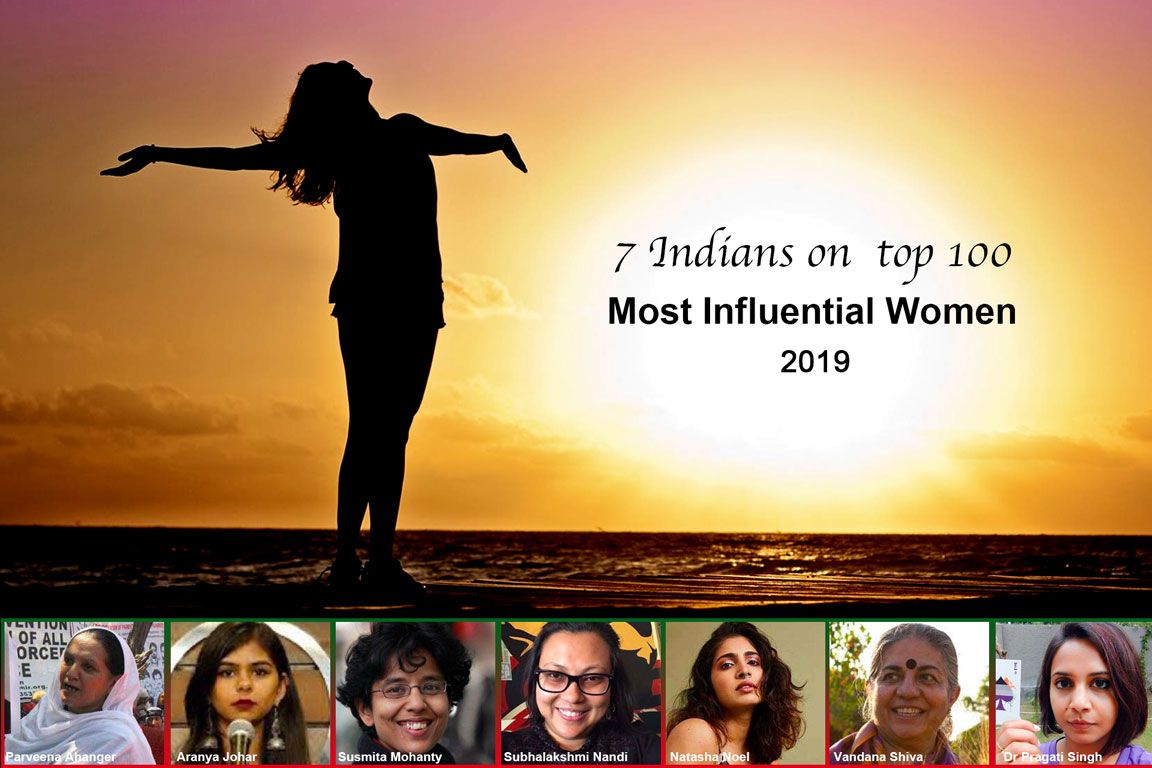 BBC’s list of the 100 most powerful women of 2022 is out and seven inspiring Indian women are featured in it. Kudos to the winners: Parveena Ahanger, Vandana Shiva, Natasha Noel, Subhalakshmi Nandi, Susmita Mohanty, Aranya Johar, and Dr. Pragati Singh.

Following are the list of Indian women who made it to BBC’s list of 100 most powerful women in the world:

This 50-year-old mother from Kashmir is popularly known as the ‘Iron Lady of Kashmir’. She has been protesting relentlessly against enforced disappearance. She is the founder of the Association of Parents of Disappeared Parent (APDP) in 1994, it has the backing of the United Nations. Parveena for her human rights activities has been nominated for the Nobel Peace Prize in 2015 and has also been honored with Norway’s Rafto prize in 2017.

The inception of her protest began in 1990 with the disappearance of her 16 years old son, Javid who was then a student of class 11. She ran from pillar to post- police station to a detention center to detentions camps. Only to return empty-handed and with a bunch empty promises: “Do not worry, he will be released.” With each passing day, her anxiety knew no end, and in 1991 she filed a case against the army in Jammu Kashmir High Court. She soon realized she wasn’t the only one with this plight but there were hundreds of other families who were looking for their loved ones.

She rallied the other families to fight in unison, and with 50 members, she started the APDP. They started arranging sit-in protests on the 10th day of every month. They had to face numerous obstacles from the administrative machinery. The APDP works to provide support to the bereaved families and provide medical support and counselling for aged parents. It has now become a mouthpiece for the broken souls. Parveena who is known as Jiji, calls herself not a leader but a sufferer. It has been a long arduous journey for this mother’s search for her son and it’s a reward in return that she made it to the list of 100 most powerful women in the world.

This young and extremely deserving 21-year-old Slam poet from Mumbai’s Sophia College has also been featured on this list. Her spoken word poem ‘A Brown Girl’s Guide to Gender’ rocked the generation Z. With her words, she takes on the social evils like misogyny, gender inequality, slut-shaping, stereotypes, mental health stigma, and sexual harassment. Diagnosed with Attention Deficit Disorder, she has millions of followers on her social media profile. Her polarising content has garnered a lot of hate and threats, but she continues with courage and spunk and has proudly made it to the list of 100 most powerful women. Her latest poem ‘The Language of Equality’ was released this year.

She is a spaceship designer and only Indian space entrepreneur to have started companies in 3 different continents. She has also founded the EARTH2ORBIT, India’s first private space start-up. She has also worked at the International Space Station Program at Boeing in California and at NASA Johnson. She was voted by the Financial Times in 2012, as one of the ’25 Indians to Watch.’ She was feted with the International Achievement Award on Capitol Hill in Washington DC and now featured in BBC’s 100 Most Inspiring women.

She is a renowned gender activist and the policy director at the International Centre for Research on Women. Nandi has also served as the head of the Women’s Economic Empowerment Unit in the UN. Her work is focused on improving gender equality in Asia and it mainly revolves around women farmers, education for women, and violence against women.

She is a 26-year-old yoga guru, motivational speaker, and social media influencer. This Mumbaikar lost her mother at a tender age of 3 and is the victim of sexual abuse (from 7 years old to her early teenage years). She was fought severe depression and now helps others achieve mental strength with dance and holistic fitness.

She is a scholar, environmental activist, food sovereignty activist and author of over 20 books. Shiva is an eco-feminist who pioneered the Chipko movement and fought against India’s Green Revolution. She has also founded the Research Foundation for Science Technology, and Natural Resource Policy, which works towards providing sustainable methods of farming. Her NGO Navdanya helps in finding a solution to ecological and economic problems.

She started the Indian Aces, an online community that addresses asexuality and other sexual preferences. She isn’t just a doctor but also a poet, and had won the Laadli award for her poetry on asexuality. These magnificent women have inspired a thousand others and they have derived strength from things that should have slowed them down. Young girls should try and emulate these iconic women. Their personal fight has moved millions globally. So, next time someone tries to pull you down, stand up for your right! Who knows, you could be next on the list of BBC’s 100 most powerful women too.

These most powerful Indian women are not only amazing at their jobs, and occupations but have also broken barriers and came out stronger than ever.

Most Influential Women In The World

Let's have a look at the most inspiring women in the world. It may be easy to be a woman in today’s life but there was a time when women empowerment was not coined & women struggled to break norms and achieve what they were truly born to beFollowing is the list of most influential women in the world: