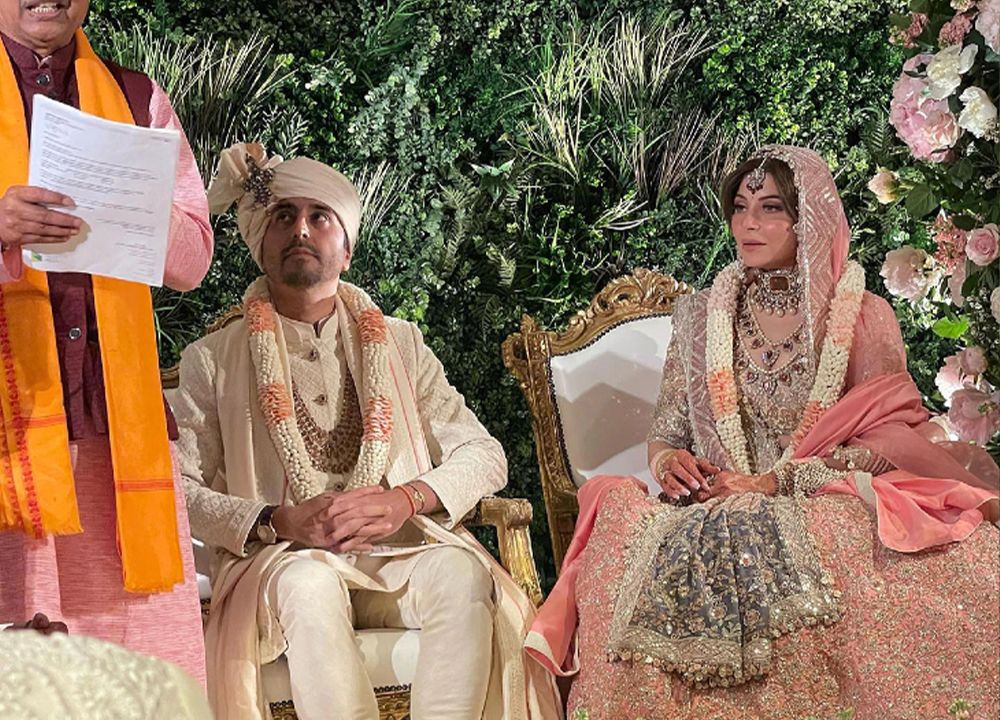 Kanika Kapoor, the baby doll of the Bollywood music industry, has tied the wedding knot with the London-based businessman Gautam Hathiramani on 20 May 2022. The photos of their wedding have gone viral on the internet, and fans of the singer have gone crazy after seeing the eye-catching photos and wishing the couple great blessings. In this article, we have jotted down all the information regarding Kanika Kapoor's wedding, life, and career, achievements, etc. So scroll down for some interesting information about Kanika Kapoor.

Singer Kanika Kapoor is one of the most popular female singers in Bollywood. When she was 12, she began studying classical Indian music under the guidance of musician Ganesh Prasad Mishra in Lucknow, Uttar Pradesh. In the Bollywood music industry, Kanika is a household name. As a result of her hard work, commitment, and devotion to music, she has become one of the most promising singers in Bollywood today. She has been ranked as one of the best female singers in the world. She achieved this position after a long and arduous process. She currently resides in London; however, she frequently travels between India and England for song recording and other music-related matters. She is now one of India's most well-known playback singers, thanks to the song Baby Doll in the film 'Ragini MMS 2.'

'Jugni Ji' was the beginning of her professional singing career, and she hasn't looked back since then. She married Raj Chandok, a London-based businessman, in 1997. Despite the fact that Raj Chandok and Kanika Kapoor have three children together, they have separated for personal reasons. Baby Doll, Lovely, Kamli, and Desi Look are just a few of the many songs she has won honors for, that have millions of views on YouTube. After divorcing Raj Chandok in 2012, she and her children lived a happy and affluent life in India. As a superstar, she has all she desires in terms of fame and fortune.

Kanika Kapoor, a popular Bollywood singer, is known for her amazing voice and power pack songs. Kanika currently resides in London for song recording and other music-related pursuits.

Kanika Kapoor is a multilingual singer who performs in Punjabi, English, and Hindi. In 2012, she began her Bollywood career. Baby Doll" from "Ragini MMS 2" was the song that made Kanika Kapoor a Bollywood singing sensation.

Her most popular song was "Chitiyan Kalayin" for the 2015 film Roy. In the film "Leela Leela," Kanika again gave the singing voice to Sunny Leone for the hit song "Desi Look." Lovely, Kamlee, Beat Pe Booty, and Chhod Diya are just a few of her most popular songs. Kanika sang "Hello Namstey" for PM Narendra Modi at Wembley Stadium (London) in 2015, when Modi Ji was the guest of honor to address the Indian community in England.

Kanika Kapoor has been awarded many awards for her great voice and mind-blowing singing performances. Some of the major awards and achievements backed by the powerful singer are:

Kanika Kapoor has given the love a second chance and has tied the knot. On May 20, the great Bollywood singer married Gautam Hathiramani, a businessman in London. There were a number of videos and photos from the gorgeous wedding ceremony that soon appeared on the internet. In her peach coloured lehenga, Kanika looked lovely. The varmala ritual can also be glimpsed in viral photos. A private wedding was held at a five-star London hotel attended by relatives and close friends.

Kanika Kapoor Looks for the Wedding

Kanika Kapoor wore a peach lehenga with a lot of embroidery for her wedding. A choker necklace, a mangtika, and bangles completed her outfit. A pastel-colored Sherwani and turban completed Gautam's appearance for the event. Several wonderful aspects of the ceremony may be seen in the images and videos that have been posted online. At the same time, Gautam appears to playfully back away from Kanika as she places the garland on him.

Pre-wedding celebrations of Kanika Kapoor and Gautam Hathiramani began with a lavish Haldi ceremony and ended with a Mehendi ritual. She posted a few photos from her Mehendi party on her Instagram account. It was a small, close-knit gathering attended by only a few close people. It was easy to see that the pair were enjoying themselves while surrounded by their loved ones. Kanika wore a pastel green lehenga that accentuated her beauty. She went with a fresh cosmetics look and a lot of jewelry.

So this was all you need to know about Kanika Kapoor and Gautam Hathiramani's wedding. May the couple have a happy and joyous life ahead and then fulfill each other's dream and support it.