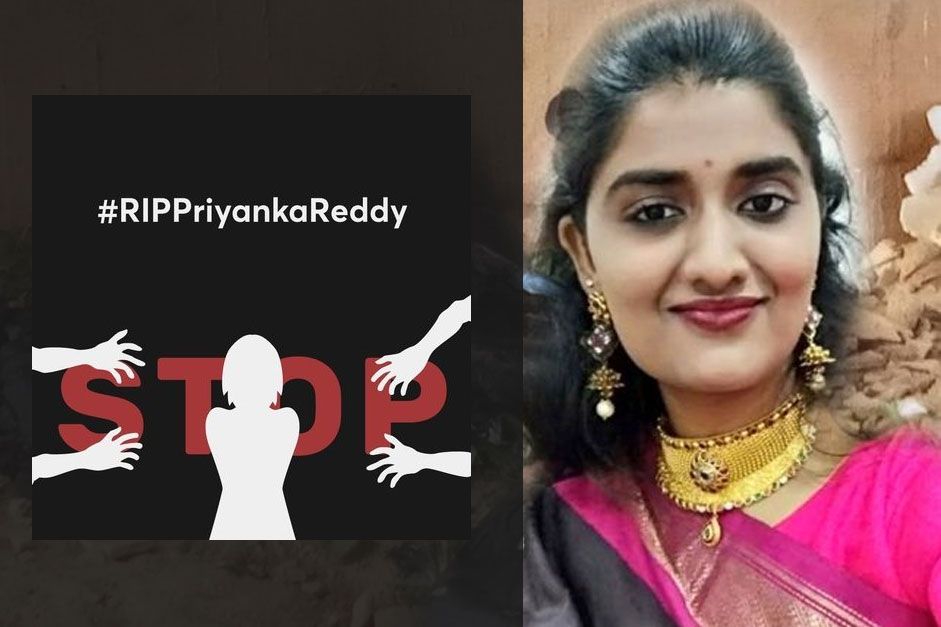 Once more, let us welcome the new ‘Nirbhaya’ of India, Priyanka Reddy. Shamefully, another case of rape on the land where women are considered goddesses. Once more, four brutal animal men raped and killed an innocent ‘Devi’. Four people on Friday were arrested by Hyderabad police, on the charge of gang rape and murder of 26 years old Priyanka Reddy, a veterinary doctor. Two of those four men were truck drivers and the other two were their helpers. According to the police, the rapers were observing her when she was parking her scooter at Shamshabad toll plaza on Wednesday evening. Later when she returned to pick up her scooter at 9 pm one of the wheels was found deflated (as done by one of the accused).

One of the four men walked to her to offer a hand for help and the other one took the scooter away. Following that, three men dragged her to the nearby empty plot and raped her. One of the accused smothered her while she screamed in pain. She is believed to have suffocated and died.  Later, those men drove her body to a distance and set it on fire. Two of the truck drivers-  Mohammad Areef (26), C Chennakeshavul (20) and the two helpers J Shiva and J Naveen planned to rape the woman the moment they saw her parking her scooter. The accused was found with the help of human intelligence and CCTV footage. The last call she made was to her sister.

She informed her that she was scared and there were men making her uneasy and she doesn’t know what to do. “Please talk to me for a while… I am scared” she said. After a while, her phone was found to be switched off. On losing the track of Priyanka Reddy, the family tried to look out for her but found no trace. In the morning at 7 am the family was informed by the police that a body was found in the underpass and she had been raped. Her family recognized her from her clothes as the body had already been burnt to ashes. The police commissioner said that a request would be made to hand over the case to the fast track court.

The brutality of the case has shaken the nation once again to its very core. The nation together is demanding justice for Priyanka Reddy. Several women’s rights organizations called out candlelight processions at Shadnagar. The masses protesting for the case are demanding “ Don’t take the accused to the court for trials. They should be hanged immediately for their offense.” Not just common public but so many known personalities have raised their voice for Priyanka Reddy. Rahul Gandhi, Akshay Kumar, Payal Rohtagi, Yuvraj Singh, Yami Gautam, and so many others took to Twitter to express their rage. The Internet has flooded with the hashtags #RIPPriyankaReddy and #justiceforPriyankaReddy.

Yet another Nirbhaya sacrificed. How many more of such cases are needed for our judiciary to finally wake up and pass strict and immediate verdicts for such rapists? Mere outrage by the commoners or the celebrities will not secure women in India. The root of this problem is set in the social values of subjugating women and their sexuality. The mentality of rapists and the potential rapists need immediate action. A man should shiver on the thought of rape. We just don’t need to empower women by increasing security or setting up foundations, we need to counter the root cause of rapes. The mentality of potential rapists needs fear if we wish to make sure there will be no more Nirbhayas or Priyanka Reddy in the future.