Police Lathi-Charge At Students Protesting CAB At Jamia And AMU 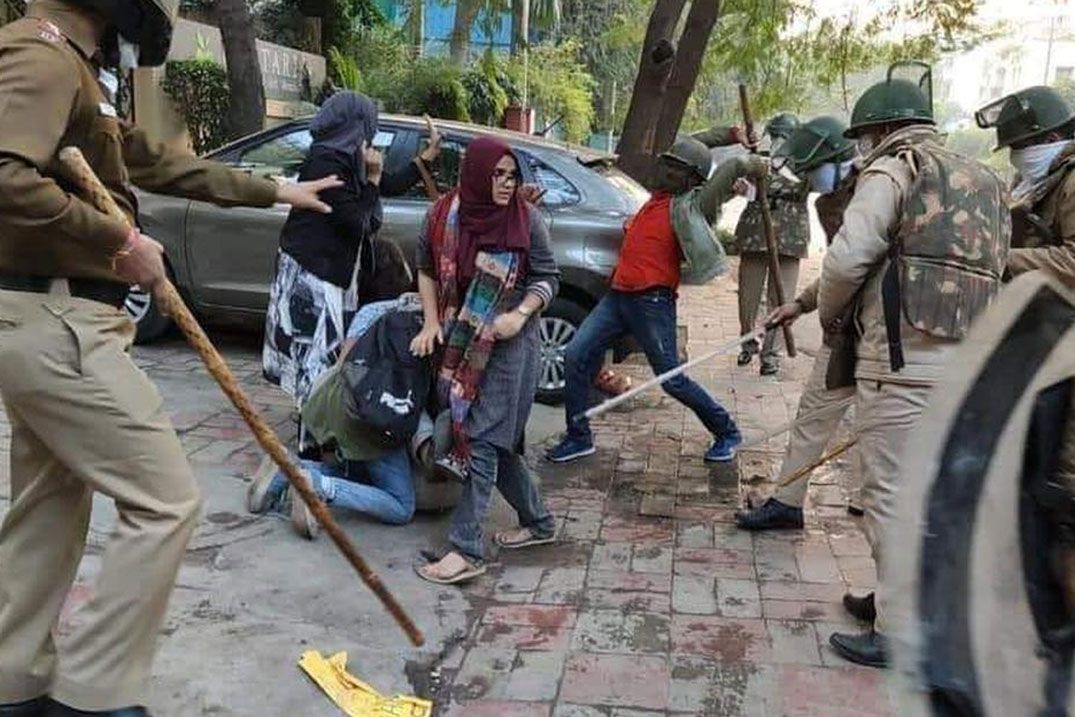 Tense air surrounded South Delhi on Sunday as news of buses being torched and police firing tear gas into Jamia University spread around. It all started when Jamia residents and students held a peaceful protest against the Citizen Amendment Bill. The bill aims to provide Indian citizenship to non-muslim immigrants from three neighboring countries.

The protest started at Jamia University. Led by young students and women, the march made its way to Jantar Mantar but was stopped at Julena Chauraha by police officials. The crowd stopped but continued the slogans when the police lathi-charged at them. Tear gas was also used on the protestors to disperse them. Although the police claim that people from the crowd became violent, eyewitnesses say that police lathi-charged without provocation. Some buses and cars were torched. The Jamia Students Union soon released a statement that said, “No Jamia student is involved in the violence happening on the streets of Delhi. These are fringe inciting violence in the garb of Jamia students.”

As the students made their way back to the University, the police entered the premises without the permission of the university authorities, shot tear gas and beat up students. The loud bangs could be heard far and wide for hours. Many parents were unable to locate their kids as they escaped to their friend’s houses. Some students had to spend the night at the house of a stranger. BBC reporter, Bushra Sheikh, was heckled by police who also smashed her phone. Many students were severely injured with fractured bones. One of them continues to be in critical condition while another student lost his left eye. Discharge summary of a 22-year-old shows that he was shot, yet the police stand by their statement that they didn’t use any bullets.

A similar incident happened at Aligarh Muslim University, where the students clashed with the police. After the Jamia incident, students of Aligarh Muslim University wanted to take out a solidarity march, but they were stopped. The UP Director General of Police OP Singh said “We are evacuating AMU today; we will send all students home.” He went on to say that “We received no reports of vandalism by the police.”

But the disturbing pictures and videos making rounds on social media tell a different story. The police can be seen breaking scooters parked on the roadside and firing tear gas, even shooting into the university premises. Internet services across the city were stopped to curb the protests. An ambulance driver told a reporter that the police were beating the wounded and were not letting the ambulance go. Over 100 students were injured and many more were arrested. Their whereabouts are still unknown.

As the news of police brutality spread like wildfire, students from across the country stepped out in the night to show solidarity with the students of Jamia and AMU. Gradually, institutions like IIT Madras, Indian Institute of Science, and student wings of CPI joined the peaceful protest. Over the next few days, many institutions joined the cause and many more are planning to do so.

While the solidarity candle march was being carried out across the nation, many made their way to the Delhi Police Headquarters to demand an immediate release of the detained students. On one hand, you could see Azaadi slogans being chanted outside the headquarters, on the other hand, a group of people sang patriotic songs. The number of protesters kept increasing until the police released all detainees around 4 am.

There has been a division among the people. One side supports the police and accuses the students of getting violent, while the other side accuses the police of using unnecessary force on peaceful protesters. The police insist that they did not enter Jamia’s library, but the recorded videos tell a different story.

Ten people have been arrested in relation to torching the buses and resorting to violence in the protest. However, the police stated that none of them were students of Jamia. A video of a cop addressing the people has gone viral on WhatsApp. In that video, the cop says that there are some politicians who are trying to spread mischief and that people should be aware of them.

Although one may feel that lathi-charge was required to disperse the crowd and control the situation, several videos of police brutality show that unnecessary force was used on students. The Delhi police’s motto is Peace, Service, and Justice, but what unfolded at the protests was condemnable, to say the least. The people who became violent are being swiftly brought to justice, but will the same be done to the police.