Lisa Haydon: THINGS CAN FEEL PRETTY EXTRA AFTER HAVING A BABY 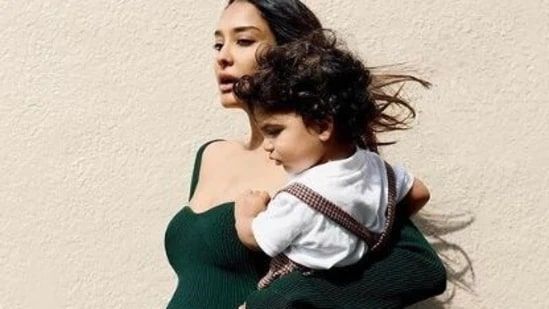 In June, the actress Lisa Haydon and her husband, Dino Lalvani, became the proud parents of their third child. In October of 2016, Lisa and Dino Lalvani tied the knot, and the following year, in 2017, Lisa gave birth to her first child, Zack. In February of 2020, the couple was able to welcome their second child, a son named Leo. In the year 2021, she welcomed her daughter Lara into the world, making her a mother a total of three times.

The actress disclosed on Instagram that she had given birth to three children in the span of four years and described the experience as one that had taught her humility. In the photographs, Lisa Haydon is seen striking a pose while holding Lara in her arms. She styled her hair into a bun on top of her head and wore a long black dress with a high slit and full sleeves. The photographs were taken in natural light on the island of Lantau in Hong Kong.

When Lisa shared the photos, she accompanied them with the following caption: "So I've been away from Instagram for a bit now, here's my best try at a catch-up post. Things can feel pretty extra after having a baby. It's likely due in large part to hormones. The experience of having two children under the age of two and three children in just four years has been very humbling. I don't mean humbled in the same way that I've heard people say after they've won an Oscar lol; rather, I mean humbled in the sense that I feel completely incapable of doing anything. I had anticipated that we would be taking it one day at a time; however, at this point, we are only taking it one meal at a time.

Nobody will tell you how much time you'll have to spend burping your child. And the potential consequences of not getting that burp up. When I need a quick reminder that parenthood is a journey with no endpoint, I give myself a moment to reflect. Pumping while also drinking coffee, organizing the boys' schedules (pickups and dropoffs), and bouncing the bouncer with one foot are the other things I'm doing. She summed up her thoughts by saying, "And then there's that sound, that small little noise that makes it all worth it, and when you finally hear it, it's the most rewarding thing in the world... that little burp!"

Lisa Haydon shows her baby girl being fed while she is in her arms in Instagram posts. Lisa also shared the name of her daughter along with the cute pictures. "Wasn't it just world breastfeeding week? Lara would like to thank everyone who has given her a place at the table in honor of this special week," she wrote.

Lisa Haydon's life as a mom of three kids

Lisa Haydon celebrated her 36th birthday recently. On social media, she posts pictures of her family and talks about how she is enjoying being a mother of three. Anyone who follows Lisa on social media probably knows that she likes to try out new recipes that "will also keep your kids busy... for hours."

During the first Covid-19 lockdown in April 2020, she posted about trying out different "stay-at-home" recipes with her kids at their Hong Kong home. A few months later, she put up a video of her son Zack riding a scooter in London. She also talked about how her family will spend Christmas in London in 2021. Lisa posted pictures from her trip to Mumbai in April 2022 on Instagram with the caption, "...There's no place like home."

Lisa, who "loves setting tables," shares pictures of their home meals and tables capes when she isn't sharing recipes. Lisa also loves to work out. The actor and model do everything from yoga to surfing. Even though she was pregnant with her daughter Lara in 2021, she surfed in Hong Kong. She often showed her sons Zain and Leo pictures from the beach. She posted a video of them reading in May with the caption, "...We all feel much better after reading."

Lisa Haydon is one of the most attractive moms around. But being a mom isn't as exciting as it seems. It is hard and sometimes wears you out. Lisa Haydon is totally right when she says that things feel different after having a baby. But being a mother is a woman's strongest weapon. It is also the strongest connection on earth.