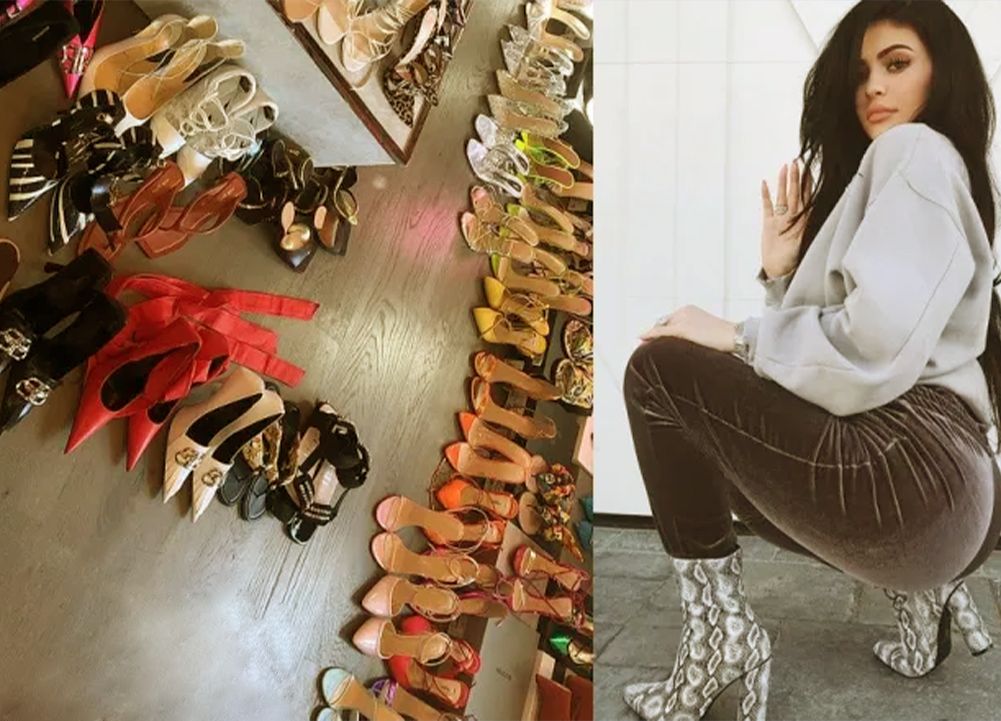 After Keeping Up With The Kardashians ended after 20 long seasons, we can all unanimously agree that we miss the Kardashian-Jenner clan. Not only did the show help shape their careers, but fans from all over the world watched the sisters grow up and become beauty moguls. Their entire life was fascinating- but what caught the viewers’ attention was the pair of shoes for women that they flaunted.

All the sisters turned out to be incredibly successful, guided by none other than the iconic Kris Jenner. But, if we were to pick one who had the biggest breakthrough, it has to be the youngest sister, Kylie Jenner.

When the show started, Kylie Jenner was in her awkward pre-teen years. And, as seasons passed, we saw her coming out of the Kardashian shadow and becoming her person. Kylie may just be 24 years old, but she is the CEO of the cult beauty brand, Kylie Cosmetics.

In 2019, Forbes dubbed her as the youngest “self-made” billionaire. At the time, her company was worth $900 million.

Well, self-made or not, no one can deny that Kylie Jenner has made a mark for herself in the industry. And, say what you will about her, but the truth is that she’s a big supporter of Arab brands. Even with 275 million followers on Instagram, the fashion-forward entrepreneur doesn’t subscribe to the usual high-fashion brands. Over the years, Kylie has expressed growing interest in emerging designers from the Arabian part of the world. Here is a quick rundown of all the times Kylie Jenner supported Emirati brands.

Kylie Jenner has co-signed Yousef Aljasmi, a Kuwait-based designer’s brand since day one. At the annual Kardashian-Jenner holiday party in 2018, Kylie was spotted twinning with her then one-year-old baby girl Stormi in a customized, glitzy Yousef Aljasmi piece.

The dress was a stunning floor-length silver sequined number, featuring a thigh-high split. She styled the dress with classic transparent pair of shoes for women and silver accessories.

For her 21st birthday in 2018, Kylie carried a pink crystal orb clutch from Marzook, that perfectly captured the essence of her custom-made LaBourjoisie jumpsuit which was encrusted with over 70,000 pink Swarovski crystals. For those who don’t know, Marzook is a Kuwaiti label that specializes in luxury handbags.

The highlight of this article is, of course, the Arab designer who made the custom Kylie Jenner shoes, Andrea Wazen. Andrea Wazen has garnered a magnificent celebrity clientele, and Kylie Jenner just happens to hop on the bandwagon.

Now marketed as the “KYLIE” PVC pumps, the Lebanese shoe designer’s designs have become a fan favorite. It seems as if the entire Kardashian-Jenner family is a fan of Wazen’s designs. Recently, even Khloe Kardashian was seen in an all-black ensemble that was paired with “All-Black Denver” chic noir heels from Wazen’s collection. Other celebrities who have collaborated with Andrea Wazen include Jennifer Lopez, Emily Ratajkowski, Jessica Alba, Hailey Beiber, Kate Hudson, and many others. Girls, if you want to explore Kylie Jenner shoes ideas, you know which designer to hit up!

If you are a loyal Kylie Jenner fan, you know how much she loves Aliel. Aliel is a luxury Egyptian accessories label. On many occasions, Kylie has been spotted in Aliel accessories. In 2017, she was seen carrying a geometric rectangular bag from Aliel, paired with jeans and a Fuschia top. For footwear, she spotted the trendiest pair of shoes for women, the classic triangular nude heels.

For a photoshoot in 2019, Kylie Jenner was spotted in London-based Emirati designer Ahmed Khyeli’s custom-made collection. The look featured a dramatic vintage little black dress that had a frilled train running along the side and an oversized ruffled collar.

If there is one takeaway from this article, it is that Kylie Jenner is the biggest fan of accessories! She was seen carrying a signature box-shaped, beige croc skin Ida handbag from L’ Afshar. This was her last look for Keeping Up With The Kardashians before the show ended in 2021. Her look was white-on-white and exuded elegance. L’ Afshar is known for catering to modern women with a bold yet sophisticated style.

If you haven’t heard Amina Muaddi’s name, you are definitely living under a rock. Amina Muaddi isn’t just Kylie Jenner’s personal favorite Emirati brand, but she is also Rihanna’s favorite luxury shoe designer and Fenty co-collaborator. In 2019, Kylie Jenner was spotted in a pair of shoes for women designed by the legendary Amina Muaddi. It was a bright pink-colored heel with a bedazzled silver brooch. In recent times, Amina Muaddi has become the most in-demand footwear brand for celebrities.

Last but not least, we have Nicolas Jebran. For a photo shoot and feature with the Italian magazine S Moda, Kylie wore a jaw-dropping lingerie-inspired dress from the Nicolas Jebran NJ Capsule 19 collection. It was a stunner.

These were some of the Arab brands that we know Kylie Jenner is a fan of. On several occasions, she has also been spotted in many other Emirati designers’ collections including the opulent designer, Bahraini Shaima Al Mansoori. With this, we conclude our feature on the beauty mogul and entrepreneur’s love for Arab brands. Make sure you check out Andrea Wazen’s pair of shoes for women collection!