Is He Busy Or Just Ghosting You? 7 Signs That You Have Been Ghosted By A Boy 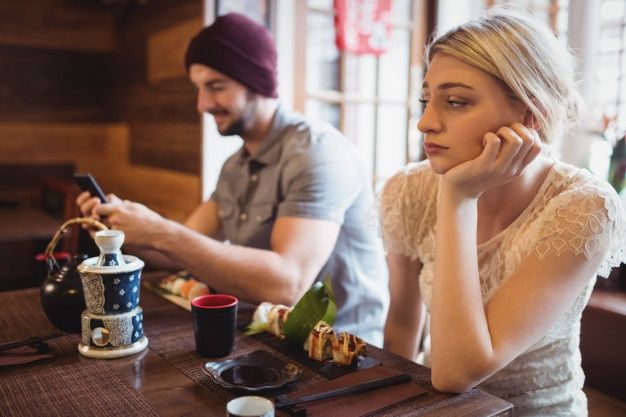 Has the guy you were recently getting to know been ghosting you? Well, getting ghosted can be a real bummer. But it can also be confusing at times. It often gets hard to tell if someone is just busy or you’re getting ghosted. So, here are 7 signs that you’re most probably getting ghosted. But before that, let’s take a look at what ghosting is exactly.

What does it Mean When Someone is Ghosting You?

Ghosting is a term used to describe a sudden negative change in the behavior of an individual towards you. It tends to imply rejection but without any confrontation, explanation/justification, and any apparent warning whatsoever. That’s precisely why it often tends to leave the person getting ghosted dubious, hurt, paranoid, and sad. It doesn’t necessarily have to be by a significant other or lover as friends also witness ghosting.

It can get tricky to identify whether someone is ghosting you or not. This is mainly because people tend to get busy too and it might just be that.

Also read- Tips To Be His Milady

7 Signs That You Have Been Ghosted By A Boy

But here are some warning signs which will help you to figure out if they’re ghosting you:

This is one of the most common aspects of getting ghosted. Yes, people tend to get busy. But nobody is ever really too busy to not be able to talk to someone they’d want to. If he keeps giving you an excuse of being “too busy”, then look for other signs to confirm that. He might be busy but that wouldn’t change his energy or enthusiasm while talking to you whenever he does.

So, if you see a sudden change in his energy and vibe then that might be a warning sign. Notice if his replies have suddenly become one-worded and dry as if he’s obligated to talk to you. He also might be taking hours and even days to return your texts and/or calls with the same excuses. If he’s doing any of that, then he’s planning on vanishing from your life if he hasn’t already.

Soft ghosting means responding with emojis or just leaving the conversation by liking the message. It’s a way to continue a conversation without actually continuing it. So, even though he’s not responding, he’s technically not ignoring you either. You would also sometimes see him online but just wouldn’t talk to you. It’s quite a sly way to get on to the actual ghosting part which you should look out for.

3. You’re the One Who’s Always Putting in the Effort

4. He Ditches your Plans a lot

Sometimes it’s just natural to cancel plans. He might be feeling under the weather, probably got stuck in work, or simply didn’t feel like it. But if he’s coming up with reasons for every single time you try to make plans, then something’s fishy. He might also say yes to a plan but cancel at the last minute. Sometimes, even while you do hang out, he would seem distant or like he’s waiting to just leave. That is just as much a red flag as bailing on you all the time. So, keep a watch for such behavior.

5. Your Mutual Friends are Getting a Bit Distant Too

Your mutual friends start to get weirdly distant with you at the same time he does. Coincidence much? Not really. It’s most probably an indication that you’re about to be ghosted. If a guy is ghosting you, his friends might start acting differently around you too. They might stop responding to you or act strange if you bring him up in conversations, etc.

6. He’s Meeting Other People But Not you

This is as conspicuous as it could get. If he’s ditching your plans but meeting up with other people, then he’s ghosting you. He also might be going out with other girls without letting you know. And when you try to bring it up, he’ll either try to avoid that topic altogether or have excuses ready. This means that he’s started to make more space for someone else in his life.

7. He Only Talks to you Properly When He Wants Something

If he has cut down communication with you but reaches out to you only when he wants something, then run. That’s ghosting tactic 101. He might suddenly seem apologetic if he wants needs help or just wants to have drunken sex. Who knows, he might even start acting nice all of a sudden just to get closer to your friend! It is important that you stay on guard and don’t excuse this kind of behavior.

Ghosting can take a toll on you at times. But there’s nothing communication can’t solve! Tell him you need to talk to him about something serious and then try to explain. Let him know what ghosting feels like and how it is affecting you. Ask him if you did something that upset him or if he’s going through something personal that’s making him distant. Try to communicate your feelings and make sure to ask him about his too.

However, if he still refuses to talk properly or keeps giving excuses, then it’s time you let go of that relationship/friendship. After all, there’s only so much you can do. The best you could try from your side is to communicate. But if he’s unwilling to sort anything out in the first place, then take it as a sign. Ghosting sucks big time. But you have to remember that if you get ghosted, it’s never your fault. It’s simply their loss!