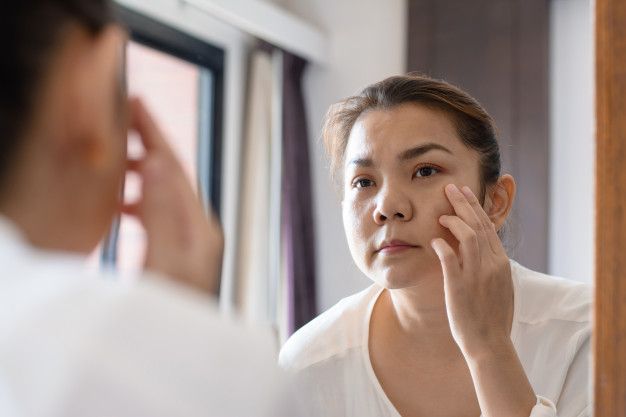 Once you cross your 30s, you would start noticing frown lines or wrinkles on different parts of your face. These can be found on the forehead, between the eyebrows, edges of the lips, etc. Wrinkles between the eyes are quite common and can be seen before you’re 30 years old as well. These are formed due to the aging of the skin with time along with a few other factors like genes, exposure to the sun, etc.

Dealing with frown lines can be arduous, given the fact that they get engraved on the skin in no time. Have you been wondering how to get rid of frown lines and deep wrinkles between eyebrows, without being too harsh on the skin? You’re at the right place. We’ll be discussing all that you need to know about frown lines and their cure.

What Are Frown Lines?

Frown lines are the vertical lines or wrinkles between the eyes. Another set of lines are the ones that are horizontal and are located above the eyebrows. These are known as the glabellar lines. The wrinkles in the corners of the mouth or lips are also examples of aging lines.

Why do Frown Lines Occur?

The major cause of frown lines and wrinkles between eyes is age. When one gets old the muscles of our skin gradually lose their elasticity and firmness. This results in the sagging of the muscles, thereby causing frown lines. Frown lines can be noticed from an age as early as the 20s due to several other reasons as well.

Do you have frown lines and wrinkles between eyes that are hard to get rid of? There are chances that you have genetic frown lines. Much like other genetic disorders and infections, these happen when the DNA is passed on from one person to another. How to get rid of deep wrinkles between eyebrows that are genetically caused? Consult your dermatologist and begin suitable medication.

Excessive exposure to the harmful ultraviolet rays of the sun damage the collagen and elastin, present in the skin. Thus, frown lines and wrinkles between eyes are bound to form. Collagen is the substance that is responsible for tightening the skin and preventing signs of aging.

Studies show that wrinkles and fine lines caused around the mouth area are more commonly found in people who have a tendency of smoking. Smoking is known to hinder the blood flow in our vessels, thereby limiting the supply of oxygen to the cells and tissues. Hence, the elasticity and tightness of the skin get further reduced.

How To Get Rid Of Frown Lines?

Here are the 5 best ways to reduce frown lines:

Celebrities undergo a lot of treatments throughout their career to maintain their facial skin. These refer to getting rid of frown lines and wrinkles. Injections like Botulinum toxin are usually used by dermatologists and cosmetic surgeons to treat frown lines. Other injectable fillers like those of collagen, hyaluronic acid, etc. are also used, alternatively.

Surgeries like the facelift or the forehead lift are quite common when it comes to getting rid of frown lines and wrinkles. Are they successful? Yes, in most cases, given that these are quite simple operations.

If you don’t want to spend tons of money on medical treatments, you can opt for simpler and way cheaper, homemade remedies. DIY methods to tighten the skin using kitchen ingredients are:

Frown lines cannot be tackled if a proper skincare regime is not followed. The CTM method is a must. It refers to cleansing, toning, and moisturizing. Include scrubbing into the routine twice or thrice a week to eliminate all the dead skin that further causes wrinkles. Sunscreens are absolute essentials to fight against the sun’s detrimental UV rays. Investing in good sunscreen is necessary.

Staying hydrated and incorporating a healthy lifestyle is vital for getting rid of frown lines. Omega-3 fatty acids play an important role in the same. Include fish oil or alternatives like flaxseed oil in your diet to sustain the elasticity of the skin.

As basic as it can get, the importance of effective sleeping can never be stressed enough. Sleeping helps repair and rejuvenate the skin. Thus, frown lines can be reduced by following a proper sleep schedule.

Frown lines can be temporarily hidden through makeup but permanent results matter the most. Prevention is always better than cure. Having a disciplined and healthy lifestyle from a young age can curb the formation of frown lines for a long time. However, it’s also important to realize that with age, wrinkles are going to appear sooner or later and are going to stay. Their intensity can be controlled but after a certain point, frown lines are as natural as graying hair.

If you’ve been suffering from the untimely advent of frown lines and wrinkles between eyes and eyebrows, follow the steps mentioned above to reduce them. You can try out newer DIY recipes as well and see what works best for you.