Dr. Priyanka’s Tragedy: Where Do We Go From Here? 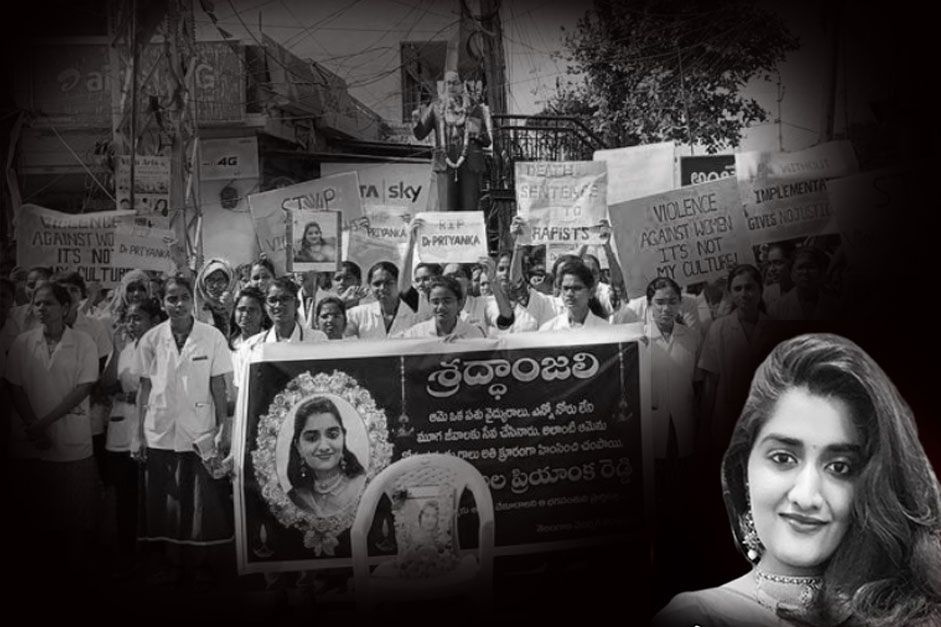 There are active petitions online that want to get Dr. Priyanka’s name removed from the website. But, this raises serious questions about the mentality of the people that we are surrounded by. There must be a severe lack of empathy and even a mental disorder or two for someone to go to a pornographic website and search for the charred victim’s rape video. To imagine that the search was made over eight million times is hard to fathom.

While the protests and candle marches were urging capital punishment for the accused, the automated response from the police and the politicians answer every unasked question except the one that was asked – how to ensure women’s safety? On Monday, the Rajya Sabha member and former actress Jaya Bachchan openly called out for the lynching of the accused in the rape case. While it is debatable whether the Bollywood-style-speech made by Jaya Bachchan holds value or not, that is not a way a person of influence is to speak in the parliament.

Instead of ensuring better security measures, police reforms, a speed-up trial, Jaya Bachchan openly encouraged lynching while it continues to be one of the dreadful challenges that India is already facing. In the past few years, many cases of lynching took place in India. The mob violence was caused by fake WhatsApp messages or even rumors. The lynching ideology puts more at risk than it protects. If tomorrow an innocent man is lynched on the false suspicion of rape, will Jaya Bachchan acknowledge her role in insinuating it? The anger against the accused is shared throughout the nation, and perhaps it would be appropriate that the rapists get hanged in public. But for members of the parliament to make such statements to emotionalize the situation is insensitive and a misuse of their power.

Unfortunately, Jaya Bachchan is not alone when it comes to insensitive and rather heartless comments made by politicians. Rather than introducing ways to make society safer for women, the Chief Minister of Telangana called for an 8 pm curfew for women in the transport department. This step does nothing to ensure women’s safety except for holding them liable for their protection. Out of the 24,000+ cases of rape reported in 2012, 98% of the cases showed that the victim knew the rapist. The 8 pm curfew is nothing more than a knee-jerk reaction from the Chief Minister. If 98% of victims knew their rapists, women are not safe at home either. Confining women’s movements won’t stop the rapists from raping.

Telangana’s Home Minister Mohammad Mahmood Ali did not think twice before blaming the victim. He claimed that the victim should have “dialed 100.” The minister was clearly angry when he questioned why the “educated” doctor chose to call her sister instead of the police. While the Home Minister was busy blaming the victim for not calling the police, the Cyberabad police suspended three officers for dereliction of duty. The victim’s family claimed that the police wasted a lot of precious time over jurisdiction issues. After a detailed inquiry, the allegation was found to be true. The victim’s family had approached the police one and a half hours after the last conversation with Dr. Reddy. If they had acted on time, maybe the course of events that followed would have been completely different.

In Dr. Priyanka Reddy’s gang-rape, family has turned away politicians along with the media and even the police. They were assisted by their colony members who felt vexed by the press and politician’s attempt to gain publicity and malign the tragedy. The society members put up a placard outside the colony’s gate that read, “No entry for media, politicians, and police.”

The family maintains their stand that timely action by the police could have saved their daughter. Parents of the victim had said earlier that they do not want sympathy but that they want justice. CPM leader J. Jenga Reddy and CPI secretary Chada Venkat Reddy were not allowed beyond the locked gates.

Priyanka is not Nirbhaya

Whenever the news of a heinous crime like rape grips the nation, hashtags like #IndiasDaughter and #PrideofIndia start trending. Even the name Nirbhaya (fearless) was given to the rape victim by the media outlets. But the trends seem to add more insult to the injury. Neither Nirbhaya nor Priyanka was ‘brave.’ Neither of them wore skimpy clothes, nor were they ‘asking for it.’ Nirbhaya was going home on a bus, whereas Priyanka had a flat tire on a lonely road. They were not ‘fearless’ but were rather helpless. They were not brave daughters of India. They were simple women like you and me who didn’t deserve to be thrown on the roadside or burned to death after being gang-raped.

When Nirbhaya’s case gripped the nation in 2012, many flooded the streets, promising women that something like this would never happen again. Then followed many more cases, including the Kathua and Unnao tragedies that garnered media attention, but nothing changed.  In the past week alone, 6 grappling gang-rape cases have surfaced. With a father raping a six-year-old daughter, a cop raping a cleaner, and a man raping a 70-year-old woman, even hope is dejected. Politicians go on to make empty promises while celebrities and people with influence condemn it on social media. But again, nothing changes.

There is usually a profound psychological reason behind Priyanka Reddy’s gang-rape. While the reasons are many, sadistic rape is one of them. These kinds of rapists associate power with aggression. Inflicting pain upon the victim is often an eroticized act. While one part of the solution should be to track down the psychological reason behind why men rape and tackle it, the other part of it should be to ensure a sped-up trial and capital punishment for the rapists. Proper steps need to be implemented on an urgent basis to save more daughters of India from meeting a similar fate.