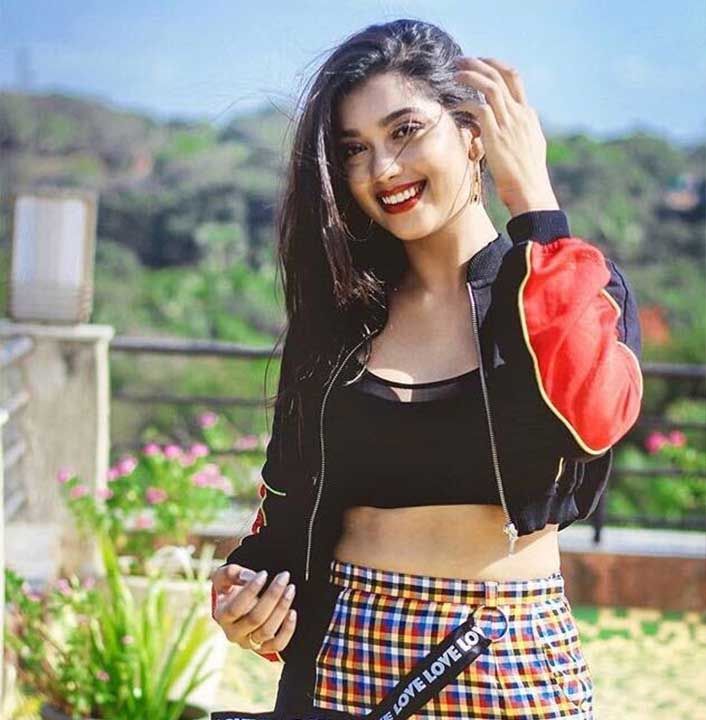 Digangana Suryavanshi is also affectionately called as a Princess by all her fans and admirers. This name stuck when she essayed the role of Princess Gauri in the serial “Shakuntala”. She started her career at the tender age of 7 on the small screen but was always meant for much bigger things. Though Digangana has been working from a young age, she never compromised on her education and completed her graduation from Mithibai College. Acting had always been her passion and her flair for the craft was noticed while she was still a child artist, when one of her directors had complimented her father saying that, “Acting is a natural instinct in your daughter.”

Digangana is not only a brilliant actress but she is also multi-talented. She had released her first song when she was only 11 years old. She is also one of the youngest published authors, with her first booking “Nixie the Mermaid and the Power of Love”, being published at just 16. She was also one of the contestants in the popular reality show “Bigg Boss Season 9”.At the peak of her popularity on the Television, she quit following her ambition of being on the big screen. She is one of the few who have successfully made this transition. She debuted on the silver screen with twin releases, Abhishek Dogra’s “Fry-Day” and Vishesh films “Jalebi”.

This versatile actress has also worked in the south and has done films like “Hippi” and “Dhanusu Raasi Neyargale”. Her performance received rave reviews from audiences and critics alike. The Voice of Woman recently got in touch with the beautiful and talented Digangana Suryavanshi and got talking about her journey as a young and successful actress and her upcoming release, the sports action movie “Seetimaarr” directed by Sampath Nandi where she is cast alongside Gopichand and Tamannah.

How has your journey been from a child actress to a popular name in the film and television industry?

Every bit of my journey is very, very special to me! I started acting on TV when I was seven with the show Kya Haadsa Kya Haqeegat and after several roles as a child artist, I got my big break as a lead in Ek Veer Ki Ardaas…Veera. I quit TV when I was at the peak of my career, a move that many people called it a foolish move. But I always believed in dreaming big and going after them to turn it into reality. It was on my 20th birthday that I got a call from Abhishek Dogra, which turned out to be my debut film Fry-Day with the veteran star Govindaji. While shooting for this movie, I landed my second movie Jalebi under Vishesh films banner and coincidentally both films released on the same day. I have always been blessed and something that hasn’t changed but only grown over the years is my passion for acting.

You have been precocious since childhood; you are an accomplished lyricist and singer- at such a tender age how did you manage to achieve so much?

Honestly, my heart has been my driving force. Whether it is acting, singing, or writing- I love them equally and I feel they are all part of me. I have always been driven and been passionate about everything that I do. My parents have always been extremely supportive of my dreams and have played the most important role in shaping my career.

Apart from being an actress, you are also a published author- how do you manage to strike the chord between two such diverse fields?

For me, every form of expression is “creativity”. Managing time and dividing it between my various creative aspirations has been the most challenging aspect. But when you love something you most certainly make time for it. Also, being disciplined and hard-working is an important prerequisite for being successful.Despite my busy shooting schedule since I was 7 years old, I never let my passion for writing subside and I published my first book “Nixie The Mermaid and the power of love” when I was just 16 years old.

You were one of the youngest contestants on the reality show- BIGG BOSS, how has that experience shaped you in your life?

Bigg Boss was indeed an experience for life. I entered the house at 17 and celebrated my 18th birthday there. I mark it as an important journey because I know that I was my complete self, with no influence at all.

As an only child to my parents, I was always very pampered and protected, so, my tenure in the house, taught me a lot about survival and the strength that I had and the kind of love and respect that I had from my fans and audiences.

Actresses are often subjected to a lot of negative objectification and comments, how do you deal with it?

Well honestly, both men and women get objectification, and there is nothing we can actually do about it. Personally, I feel that objectification or negative comments that we are subjected to do not define who I truly am. If I am honest to myself and my craft, then such negativity cannot perturb me. I always aim for positivity in my life and shun away from any negativity!

Peer pressure takes its toll, you are part of an extremely competitive industry, how do you manage this pressure?

I deal with peer pressure by keeping my original thought alive in the midst of doubts and pressures that surround us. This is the thought that keeps me intact and more than this, it is my family – an incredible support system!

Do you think there should be more female-centric movies, where the film rests solely on the shoulder of capabilities and popularity of a talented actress like you?

Well, yes! Times have changed and doors have opened up. Film making has both a creative and business aspect. I hope people also start watching more female-centric movies. There have been some amazing movies already been made and many more to come in the future.

Could you please tell us about your upcoming film Seetimaarr?

I am paired opposite Gopichand sir. Seetimaarr is a Telugu movie and it’s very different from my previous films, and from what you know, I am playing the character of a TV journalist, but there are certain twists and turns in the movie and you can look forward to something exciting and different!

What kind of preparation went in order to play a reporter?

I know a lot of journalists and reporters and some have been my friends too. So I could easily connect to the role and get into the skin of a reporter. But it’s not a usual reporter’s character, you’ll have to wait for it and watch the film!

Can you please share a message for young girls who are often afraid to follow their dreams through The Voice of Woman?

One thing that I would want to tell everyone through The Voice of Woman is that you must always listen to your instinct and run your mind to reality! Dreams do come true if you work for it!