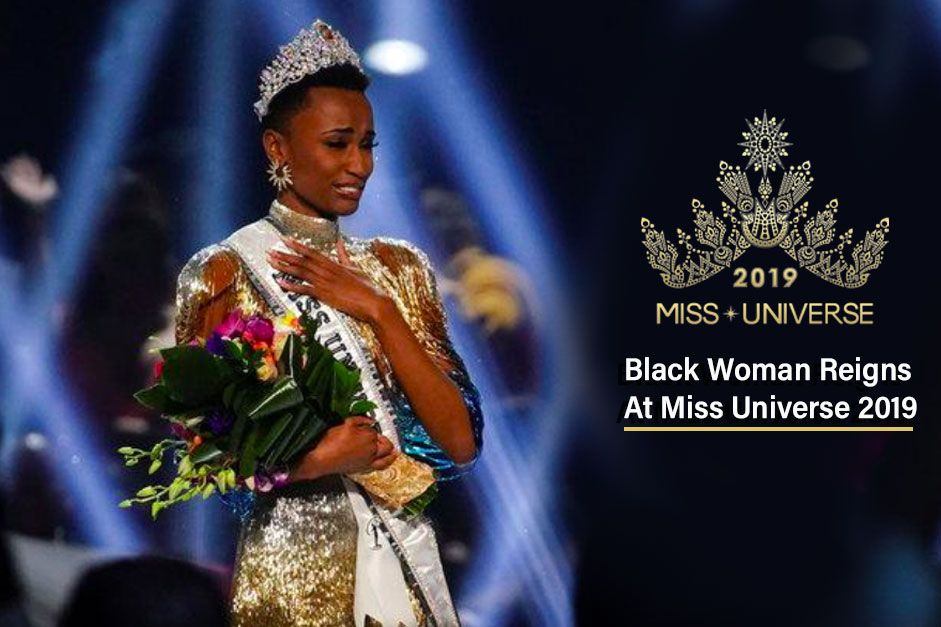 Yes, a beautiful black woman from South Africa showered her magic at the Miss Universe this year! Zozibini Tunzi became the third South African who wore the 2019 Miss Universe crown. Ms. Tunzi also delivered her stirring speech about female leadership as well as beauty after being crowned Miss Universe 2019 on the evening of 8th December. At the present time when black women often find themselves left out in workplaces, college and even professional school settings around the world, this victory has strengthened every black lady out there. Isn’t it great!!

We are living in a world where black women are taught that they have to be twice as good to go half as far as their white fellows. It may not be a big issue but what needs to be really considered is the fact that black people struggle a lot to represent themselves in the race as they used to be watched more closely than their white counterparts. Our society is full of beliefs about black people that are just inaccurate.

Undoubtedly, Zozibini Tunzi has empowered every black colored woman across the globe. Ms. Tunzi grew up in a world where a woman who looks like her, with her kind of skin and her kind of hair, was never considered to be pretty. She said these words prior to her crowning. She also added that people should change their perspective on black women. Our new Miss Universe from South Africa gave every black/brown skin girl with short hair a reason to love themselves even more. People all around the world congratulated her on numerous social media platforms.

The 26-year-old also talked about female leadership and raised opinions about how young girls should be taught about leadership and its importance. According to her, it is something that has been lurking in young girls & women for a very long time. Well, the lack of female leadership is not because people do not need it but because of what society has labeled women to be. During her competition, Tunzi wore her hair in a natural and short style, which she said was “a symbol of her firm belief in fair representation.”

Her crowning at Tyler Perry Studios in Atlanta not only acquired a wide amount of social media support but also celebrations from around the world. People noted how amazing it was to see that Miss America, Miss Teen USA, Miss USA and now Miss Universe are all black women this year. Zozibini Tunzi is just another example to demonstrate that women are the most powerful beings in the world, irrespective of their color and that is why they should be given every opportunity. It is high time that we teach our young girls to take up space and prove their abilities to the whole world.

Do you know why Tunzi’s crowning win is notable? It is being praised all over the world for numerous reasons, my friend. Most importantly, Ms. Tunzi decided to flaunt her natural hair, that is, a chic, cropped, textured cut- that is not at all uncommon to black women everywhere, however, it is just uncommon within the pageant world! According to CNN, the year 2019 is marked as the first year when the winners of Miss America, Miss USA, Miss Teen USA, as well as Miss Universe are all black women! Racism, as well as sexism, are two of the biggest obstacles that Black women across the globe face. From now onwards, let us decide to not stop any girl to flourish just because of her color particularly!!

Ms. Tunzi, a true reflection of a Queen said, “I think it is time that stops today. I want children to look at me and see my face, and I want them to see their faces reflected in mine.”