20 Best USA Dishes of All Time 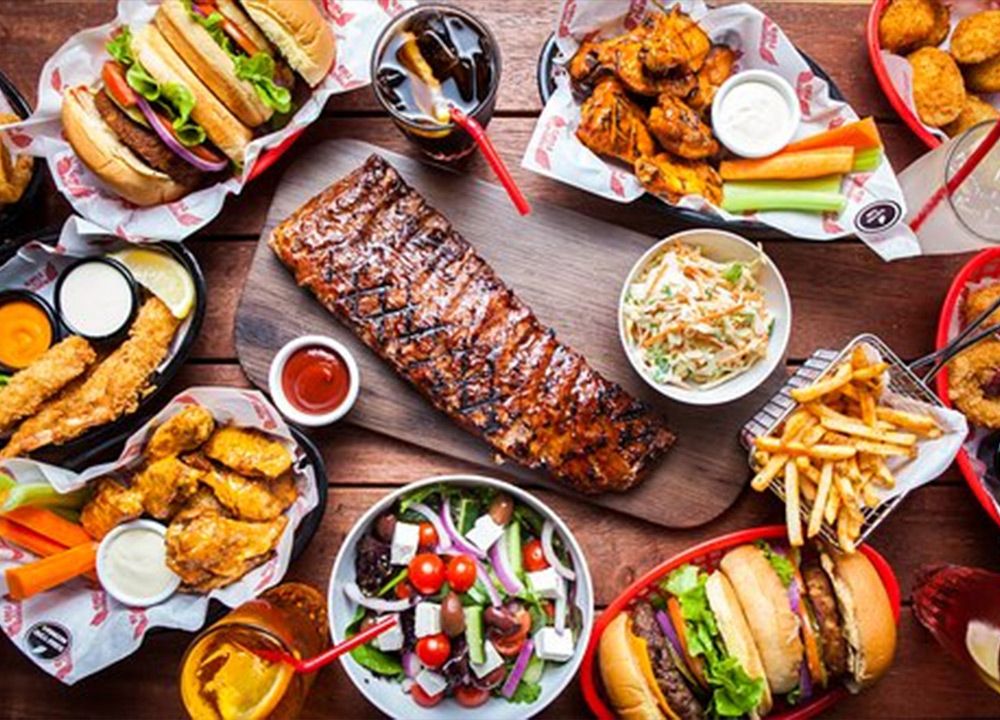 The idea of tasty and yummy food can never be separated from American food. The USA dishes definitely have the ability to satisfy your cravings. Yet, the best USA dishes are associated with a stereotype, and that is burgers and pizzas. It's time to change that stereotype and try some finger-licking dishes. Here is a compiled list of the best USA dishes that you can find across America.

Below are the amazing USA dishes you need to try out:

A basic hot dog smothered in ketchup and mustard, sandwiched between a bun, is one of the classic USA dishes. The traditional hot dog is basically a cooked sausage that is either grilled or steamed. It is served with additions such as ketchup, relish, onions, mustard, mayonnaise, chili, and cheese. There are different versions, such as New York-style with ketchup and relish and Chicago-style with no ketchup served on a poppy seed bun.

Macaroni and cheese is a perfectly complementary formulation. It became famous after being introduced to the United States by Thomas Jefferson. This oven-baked casserole is considered America's ultimate comfort food. Creamy, cheesy, and holy, made with Macaroni and cheese. Mix different cheeses well to make it more delicious. Also, finish with Parmesan cheese. No inventor can claim a classic macaroni cheese recipe, but everyone has a favorite version of the dish.

Hamburger is one of the best USA dishes that is often considered fast food. It has spread quickly all over the world until it has become a globalization meal. It consists of a sandwich that is made from chicken or meat. People enjoy it with some ketchup, mayonnaise, and vegetables. People in the USA generally eat this with french fries and soft drinks.

Usually fried with a crispy exterior, these grated potato mini-balls are sold at breakfast joints, fast food chains, and diners. Yes! These ones are the rounder yet more petite version of French fries. You need to give it a try because you will love them.

Who does not love desserts? This dessert is so extraordinary that people have spent their whole lives perfecting it by combining sugar, buttery pastry, and tart sliced apples. In the USA, this is the most popular way to satisfy cravings.

The Texans are proud to produce beautiful, tender, and flavorful meats to taste for people around the world. Texas barbecue is world-famous, and it is effortless to see why. Texas BBQ completely encapsulates the spirit of cooking in the American backyard. The grill itself is not an American invention, but the United States has definitely taken it to new heights. Also, do not forget the side USA dishes. You cannot complete a traditional American barbecue without delicious macaroni cheese or cornbread.

Scrapple is one of the best USA dishes that is made from leftover pork. It is usually filling, mixed with cornmeal, buckwheat flour, and seasonings such as salt, bay leaf, thyme, pepper, sage, and garlic. It is then shaped into a semi-solid loaf and frozen, sliced ​​, and fried before serving. Usually eaten for breakfast, crumbs can be filled with eggs, pancakes, potatoes, toast, and sometimes ketchup. This is a traditional dish, from southern mid-Atlantic states of the USA like Maryland, South Jersey, Virginia, Delaware, and Pennsylvania.

Buffalo sauce has a unique flavor and, therefore, is a nationally popular bar snack and appetizer. The Buffalo Wing has had some success outside the USA, especially in Europe. However, its consumption is far from what is considered to be authentic American cuisine.

The combination of sauce and biscuits dates back to the American Civil War days. It was an American staple in the South because it is easy to make and is less time-consuming. Today, biscuits and gravy have become the national breakfast food. Although some people find it a bit too heavy for breakfast, biscuits and gravy are favored for their rich, delicious taste and can be eaten at any time of day. Also, you can find them in most breakfast bars in the USA. A USA dish consisting of soft, pasty biscuits mixed with the sauce of your choice. This dish is topped with drizzles of milk, flour, sausage, and other meats.

Pizza must be one of the most popular USA dishes. This dish is not authentically American. In the 18th century, pizza originated in Italy. After that, Italians began to come to the United States, bringing with them this delicious cuisine. The Americans accepted this delicacy with open arms and made it their own. They just thickened the crusts and piled on a lot more cheese. Different regions of the USA have their own distinct styles. The thin, wide, foldable slices of New York pizza are perhaps the most well-known.

Meat and cheese are two phrases that come to mind when describing the eating culture of the USA. Nothing better demonstrates this than a Philly cheesesteak. This incredible sandwich got its start in Philadelphia. It is still popular there today, though it is eaten all around the country. Two Italian Americans are credited with creating this outstanding sandwich in the 1930s. After a cab driver purchased one, he urged the food vendors to cease selling hot dogs and focus all of their efforts on the Philly cheesesteak. As a result, a legend was formed. The Philly cheesesteak is a true American classic that is difficult to locate in other countries.

Is there anything that screams "America" more than a cheeseburger? A cheeseburger is one of the most delightful and divine meals, juicy, overflowing with melted cheese, and topped with the most delicious fixings. It did not, however, originate in the United States, unlike many other characteristics of American food culture. Immigrants brought it to the country in the form of a Hamburger, which originated in Hamburg, Germany. Then the Americans did what they did best. They topped it with a slice of cheese. The cheeseburger became a mainstay of the American diet by the 1930s when most Americans were wealthy enough to eat beef on a daily basis. Fast-food eateries helped popularise the dish. There is even a day dedicated to cheeseburgers called National Cheeseburger Day.

Chicken is one of the world's most popular foods, with people eating it from Cambodia to Costa Rica. American fried chicken, on the other hand, has a distinct flavor profile. It's trendy in the South, where enslaved Africans contributed their spices to a Scottish deep-frying procedure. This marriage of Scottish and West African cuisine resulted in a beautiful dish that is still popular today. The most popular type is Kentucky Fried Chicken, also known as KFC. It is sold all over the world. Many southern states, on the other hand, have their own distinct varieties with minor variances. Try them all to get a taste of the flavor explosion that comes with generously seasoned, deep-fried chicken.

Cornbread is a staple of Southern cooking, but it's also the soul food of many cultures, including black, white, and Native Americans, and not only those living south of the Mason-Dixon line. Grits are made by finely grinding maize kernels; hominy is made by soaking grains in alkali (which we encourage you to cook up into posole). Cornbread is made by leaving in finely crushed cornmeal with baking powder. Cornbread in any form, Southern hush puppies and corn pone, New England johnnycakes; cooked in a skillet or muffin tins; flavored with cheese, herbs, or jalapenos remains the quick and easy go-to bread that made it a favorite of Native American and pioneer mothers in the past and continues to do so today.

BeaverTails began as a pleasant, sweet family recipe. However, it became a multi-national firm in 1978 by injecting Canada's taste wherever it was sold with its renowned "BeaverTail''. The BeaverTail is a delicious fried dough pastry that can be topped with a variety of fruits or sweets, including bananas, whipped cream, crumbled Oreos, cinnamon, and more. You can create your own BeaverTail and choose your own adventure! The most significant places to get a BeaverTail are in Montréal or Ottawa, which are the most popular cities for the delicacy.

Cronut is a USA dish that is made by combining  doughnuts, and a croissant. The cronut is the most sought-after food in the world, thanks to the current gastronomic fad! It is made using laminated dough that is proofed before being fried at a precise temperature in grape seed oil. The sugared, filled, and glazed fried pastry is then served. The cronut was created by French pastry chef Dominique Ansel and debuted in New York in May 2013. It does not get any better than this, with the crispiness of croissants and the deliciousness of doughnuts.

Cheesecake is a delicacy made of sweet, soft cream cheese, sugar, and flavorings that has become the official dessert of New York and other parts of the country. Junior's Restaurant in Brooklyn and Eileen's Special Cheesecake in Manhattan are two of the most well-known cheesecake bakeries in New York City and the United States, respectively. The crust of a cheesecake might be made from cookie crumbs, pastry, or a buttery graham cracker foundation. It can be topped with fruit, nuts, cookies, or syrups, and it can be dense or fluffy. This USA dish can also be flavored with chocolate, pumpkin, or liquor in any combination desired by the chef (and diner). Try a slice of cheesecake topped with strawberries or cherries for a traditional New York cheesecake slice.

Banana pudding is not just a classic Southern dish, but it is also one of America's most popular sweets. The creamy vanilla pudding, whipped meringue, and bananas are piled with sweet Nilla wafers for the ultimate in-home cooking. Cooks may be tempted to cut corners when making banana pudding because it is not the easiest dish to make. However, utilizing the classic banana pudding recipe is the best way to experience the depth of taste and texture properly. The wafers dissolve into the custard after a day, but they still provide a nice contrast to the smooth pudding.

In 1953, the Ohio legislature designated the Ohio Buckeye as the state tree. The Ohio State football team got the nickname "Buckeyes" at the same time, with Brutus Buckeye as its mascot. Buckeyes were a term used by Ohio residents as early as the 1840s. This tree's nut resembles a deer's eye, with a brown coating that reveals a light brown center. Gail and Steve Lucas, a married couple from Ohio who enjoy football, were given chocolate-covered peanut butter balls for Christmas. Gail remade the dish, but she did not completely cover the peanut butter. The visible section of the peanut butter resembled a buckeye tree nut. Gail began making candies for tailgating crowds on that day.

The USA dishes are not only about burgers and pizzas. American cuisine is beyond that and has some fantastic dishes. Read about the deserts, brunch options, breakfast foods, and dinner options above. Discover your favorites and give them a try. Bon appetit!

Q1. What do Americans consume on a daily basis?

The American diet is full of meat and cheese. Therefore, they consume a lot of meat and cheese on a daily basis. Salami, bologna, ham, turkey, hotdogs, sausage, and bacon are all popular cured meats. They also eat pasta and Macaroni.

Q2. What is the strangest or most unusual American food or dish to foreigners?

Peanut butter and jelly sandwiches are considered one of the extremely weird USA dishes in western Europe.