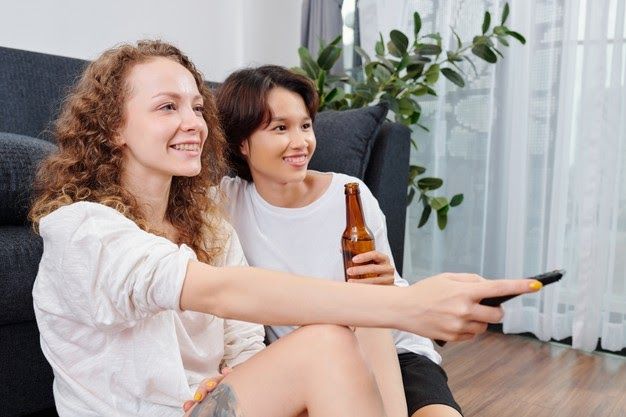 Netflix and Amazon Prime Video have indeed got everybody hooked on them. But the feeling you get when you watch a show on the television every day and wait restlessly for the next episode to get aired the next day is a different feeling altogether. And who doesn’t like a trip down memory lane? With these 90s tv shows, you are guaranteed to feel nostalgic and reminiscent. So, get your comfort food and favorite drinks with you, because you’re going to binge-watch these amazing tv shows from the 90s, all day long!

Here is the list of top 90s Tv shows which are globally well famous:

1. The Fresh Prince of Bel-Air

This popular sitcom showcases Will Smith, one of the most renowned and loved Hollywood actors, as a young man who resides in the rough and poor streets of Philadelphia who after getting into a street fight, is sent over to the Bel-Air mansion by his mother, to live with his rich aunt, uncle, and cousins. A refreshing comedy from the 1990s, the Fresh Prince of Bel-Air is just about the perfect show to binge-watch all day.

6 friends and tons of troubles; this is yet another one of the most popular sitcoms and an all-time favorite too. Teens and adults nowadays fawn over this show. The show portrays 6 friends as a bunch of reckless adults who live in New York City and takes us through a hilarious journey on how they keep landing themselves in trouble which makes their lives miserable yet happening at the same time.

With unexpectedly funny twists, self-deprecating humor, and lots of wholesomeness, this show will teleport you right into those good old days and you would undoubtedly have a great laugh while watching it.

In the mood to watch something dramatic that involves crime and thrill too? Well then, Twin Peaks is just about the right pick for you! Get ready to investigate and solve the mysterious murder of the innocent Laura Palmer in the small town of Twin Peaks, along with the FBI agent Dale Cooper. The surreal visuals and the perfectly curated cast is all the more reason you shouldn’t miss out on this show. After all, it isn’t considered to be one of the best tv shows from the 90s for no reason right!

Woah, the name itself feels like a rush of nostalgia! This incredible documentary on forensics and crime is bound to give you the chills as it follows the re-creation of some baffling crime scenes from their initial investigation till it reaches a legal and rational solution. And in the journey, you will be enjoying not only a thrilling experience but will also witness how some of the alternate versions and theories of certain crimes are contemplatively disproved by the likes of science.

An absolute classic, this show is an amazing mix of romance and comedy and shows Carrie, Miranda, Samantha, and Charlotte as a group of smart and lively women in the city of dreams, each of whom has her own crazy life and sex stories, and regardless of all their differences, stick together through each other’s difficult times and ups and downs. This is the perfect recipe to turn a boring weekend into an invigorating one as it will keep you interested and captivated throughout the entire show.

Everyone enjoys a good fusion of fiction and adventure, and this 90s tv show is the best recommendation for that. Mitch Buchannon, a lifeguard, along with his team, tries to keep the people safe from the seas at a crowded beach and amidst that, we get to see the adventurous lives of these lifeguards and how they try to save people. Jam-packed with just the right amounts of humor, action, and adventure, Baywatch will have you staring at the screen till your eyes go sore.

It doesn’t matter whether you are a child, teenager, or a full-grown adult, because Mr. Bean is one of the best family shows ever, which you can always watch and have a good time. This British sitcom is filled with tons of hilarious moments wherein no matter how much of his witty humor Bean tries to use, he always ends up creating a troublesome situation for himself, some or the other way. And his misery-instilled state only makes all the situations funnier.

Two childhood best friends, two opposite ways of passing adolescence, and a final test of their friendship – when two best friends enter into relationships with different people, their life gets more and more hectic and dramatic. With tons of drama, Dawson’s Creek is one of the best shows which will get you captivated instantly; you would want to find out what happens next so bad that you’ll not get up in front of the television until and unless you do. Yes, it’s that fun to watch!

Even gangsters and mafias are human at the end of the day and need help and assistance when life gets too overwhelming. The Sopranos is an American drama series that tends to tell a similar story; it is about an Italian-American mafia head based in New Jersey, named Tony Soprano, who after facing a lot of problems in balancing and managing his criminal life and family life, confronts his psychiatrist, Jennifer Melfi, about all his issues.

10. Star Trek: The Next Generation

Are you an adamant sci-fi fan who is obsessed with any and everything science? Well then, re watching these incredible 90s tv shows is probably the best way for you to spend your weekend! Star Trek: The Next Generation is one of the best science fiction and a classic, to be more precise. It is loaded with adventures as a new generation of Starfleet officers decides to go on a journey to discover a new planet and possible life forms in outer space.

So, what are you waiting for? Get your snacks and sodas and enjoy your weekend with the best 90s tv shows!