Competing On Unequal Grounds: Why Aren’t Women’s Sports As Popular As Men’s? 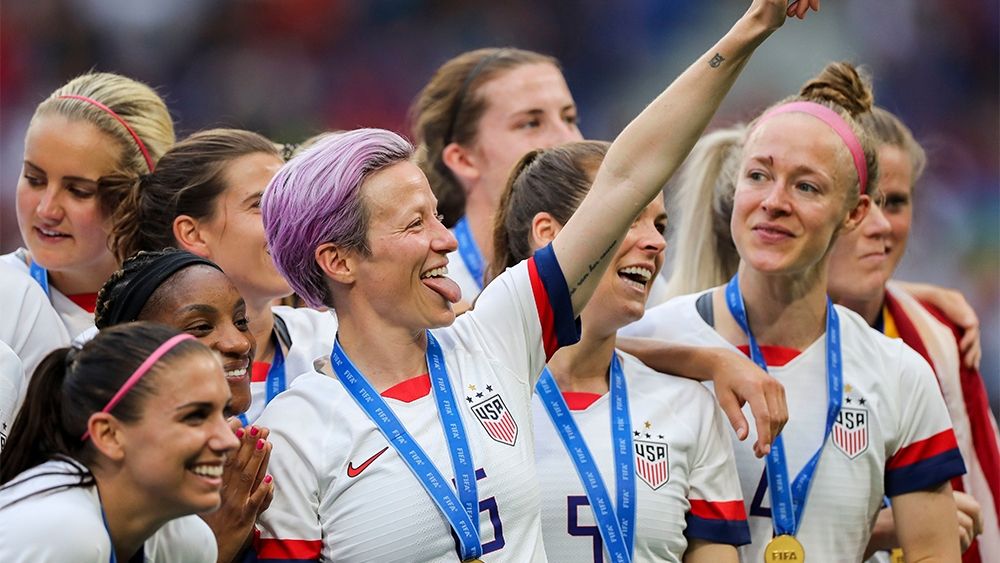 Sports is all about teamwork and cooperation. women's sports as popular as men's means days of shared sweat, long practice hours spent cheering each other on, and collapsing on the ground together after all that hard work. It means comforting hugs after losses and giddy shouting after you finally hold the trophy in all your shaking hands. It is stumbling through disagreements, slowly understanding each other more and more with every lap crossed on the racing track or every goal scored on the court.

In this field, no matter where each participant comes from, they are all equal. However, do all athletes really get the same opportunities and resources? As with every structure under this patriarchal society, sports have also become a medium of gender discrimination.

There is such a huge amount of focus on men’s sports, that women sports are pushed to the sideline. From lack of proper facilities to unfair media portrayal, female athletes have to go through a much different competition altogether. So, why aren’t women’s sports as popular as men’s? How do players, sponsors, coaches, institutions, audiences, and society at large contribute to this discrimination?

The sexism in sports starts from a very young age. Even amongst children, more boys are encouraged to engage in sports, as compared to girls. Girls are expected to participate in more ‘feminine’ and ‘poised’ activities. They are specially kept away from more intense, physical-contact sports.

The constant gender roles being advertised to them through media and books also add to this. Because the very idea of women in sports threatens societal stereotypes, young girls are conditioned to doubt the strength and resilience of their own bodies. This is carried forward into their school years. The number of girls’ sporting leagues and teams is much lower than boys’. The boys’ teams also take it much more seriously, while a girl’s interest in sports is often dismissed.

There is a distinct lack of female coaches as well. Girl athletes going through puberty might feel more comfortable under female guidance. It might also make them feel more motivated to see a woman in charge of sports, someone they can look up to and trust. Having only male sporting role models can be restrictive for their growth. All these could contribute to more and more young girls dropping sports at an early age as compared to boys.

If these patterns don’t seem problematic enough, they get even worse at higher levels. In college-level sports, the male teams often have access to better training equipment and other facilities than the women’s sports teams. In a video that went viral, a female US basketball player participating in the March Madness tournament arranged by the National Collegiate Athletic Associations (NCAA), captured the difference in the training equipment between the men’s and women’s basketball teams.

The player, Sedona Prince, noted how the women only had a rack of weights as training equipment, whereas the men’s team had a huge room filled with various training facilities.

Let me put it on Twitter too cause this needs the attention pic.twitter.com/t0DWKL2YHR

Though the NCAA apologized and provided newer facilities for the women’s team, one must ask how such a situation can occur in the first place. But there were further differences in tournament arrangement. The men’s teams were given more accurate COVID tests. Also, it was difficult for female coaches to bring their young children to the games.

These children were counted in the limited number of people each team was allowed to bring. So, if the party was full, the coaches would need to swap out an essential member for the child. This disregards the needs of working mothers. Thus, the simple question of why aren’t women’s sports as popular as men’s has a much deeper root cause behind it. For women’s sports to be more visible, there must be more women who are encouraged to pursue sports.

Why Women's Sports as Popular as Men's

If you put pictures of women on the covers of sporting magazines beside their male counterparts, you can notice a clear difference. While men’s performance and athletic prowess are more highlighted, women’s attractiveness tends to be the main focus. Men are expected to play well but women in sports are expected to look good while playing well. In the Euro 2021 tournament, the Norwegian women’s beach handball team was fined 1,500 euros for “improper clothing” by the European Handball Association. The “improper clothing” in question was thigh-length elastic shorts.

According to the regulations of the International Handball Federation, female players are required to be dressed in midriff-bearing tops and bikini bottoms. The bottoms of these bikinis must be “tight-fitting and cut on an upward slant toward the leg.” It must be noted that the male players are allowed to wear shorts no longer than 4 inches above the knee. However, this same courtesy is not extended to women, even if wearing bikini bottoms while playing handball in the sand might be discomforting.

Clearly, women’s performance in sports is not often a priority. They must ‘appeal’ to the audience visually, even if it makes them uncomfortable. The issue doesn’t end at sexualization. Female athletes are also often subjected to sexual harassment and abuse. The coaches and other authoritative figures can take advantage of the power dynamic and coerce them into dehumanizing acts. They might not be in safe environments and such derogatory treatment affects not just their performance as athletes, but more so their spirits as human beings.

In 2018, Larry Nassar, the former team doctor of the USA women’s national gymnastics team was found guilty of molestation and sexual assault of hundreds of young girls. During his trial, over 204 women gave victim-impact statements, describing how Nassar took advantage of young female athletes.

If years of his crime can go unnoticed, then how many such crimes happen daily in schools and other institutions? Such instances showcase how the system often fails to protect women in sports. If we cannot ensure young girls a safe environment to grow in, then we will lose our female athletes. There must be a better mechanism in place to look after them.

Role of Media in Women’s Sports

Indeed, women in sports are not paid as much as men. The payment schemes for both men’s and women’s cricket teams were published by the Board of Control for Cricket in India (BCCI) in 2018.

In such discussions, many fans will claim that this is because women’s teams don’t generate as much revenue. However, the reason behind this is not the women’s performance. Rather, it is because of the existential bias. There are fewer spectators for their games. Female athletes also get much less sponsorship. Their sources of earning are shrunk right from the start. So, why aren’t women’s sports as big as men’s? Ultimately, this is because of the lack of proper promotion by the media.

Also, the questions reporters ask male athletes are more focused on their sport, whereas female athletes get asked about their love life, their appearance, etc. For a man in sports, his ‘male’ is not as emphasized as him being a sportsman (though his privilege is because he is a man). However, for women in sports, their gender is considered primary, while their sport is considered secondary.

All these things add to the growing bias in the viewers’ heads. Female athletes aren’t given the chance to interact with their fans as much. Their authentic sports women shelves aren’t being showcased through the media. Rather, their achievements are constantly being downplayed. They aren’t given as much space to express themselves as athletes. If we want women’s sports to reach the audience at home, we have to create an unbiased pathway for the same.

Besides the lack of promotion, viewers also watch women’s sports with a sexist gaze. Some people claim that women’s teams aren’t as fun to watch as men’s. This is because these people constantly upholding female athletes against their self-supposed standard of male athletes.

Men and women do not play the same sports in the same manner. They have different strengths and skill sets. While male-assigned bodies might tend to play with brute force, female-assigned bodies are better at balance and endurance. Neither is more or less than the other, they’re both powerful in their way.

For example, in a sport like ultra-endurance running, women succeed much more than men. But that doesn’t mean that they are paid more than male runners. Skill has never been the reason for discrimination here. It has always been an issue of gender.

First, we need to stop making men the standard for everything. Yes, women play like women and that is exactly why they are amazing. There needs to be a change in mindset. We must encourage young girls and young children of any gender to pursue sports the same way we do to our boys. There needs to be more funding for women’s sports teams and they should get equal facilities. They must be trained according to their core strengths. There must also be more female coaches present in the lives of these athletes.

Read about: Sports Is One Of The Best Ways To Empower Women

We must also have safer spaces for female athletes. A regular evaluation of all the coaches is essential. There are many kinds of abuse that young athletes could be experiencing and we must be more aware. Perhaps, mental health checks could be arranged, to assess the stress that athletes of all genders go through, so we can create programmes that accommodate all needs.

Mainly, there needs to be better promotion and portrayal. More women-centric and other marginalized gender-centric sports magazines can be a good platform. Female athletes must be asked proper questions about their sport and their skills, without any inherent bias. They should also have more opportunities to connect with their fans.

If there are more women in sports, there will be more role models that will inspire more young girls to pursue sports, be it in any capacity. It could be a simple hobby or a passion or even turn into a lifelong career. Either way, just seeing more women can open a gateway for many children, especially if it’s more women-of-color, transwomen, women with disabilities, etc. If we do all this, then we give the next generation a lesser reason to ask why aren’t women’s sports as popular as men’s.

Towards an equal sporting world: Will we ever have Women’s Sports as Popular as Men’s?

Yes, not every young girl who has an interest in sport will pursue it as a career. But if we make sports more accessible to girls, surely many will come out on the other side at least having gained a memorable experience. After all, sports isn’t always about winning and losing, but also about teamwork, resilience, learning from mistakes, taking responsibility, understanding each other, etc.

Sports doesn’t have to be a gateway to gold medals for a young girl. All that is important is her recognizing it as a possibility and understanding that her strengths are respected there. As long as that happens, she will grow through knowing that there is so much power in expressing herself in whatever way she wants.