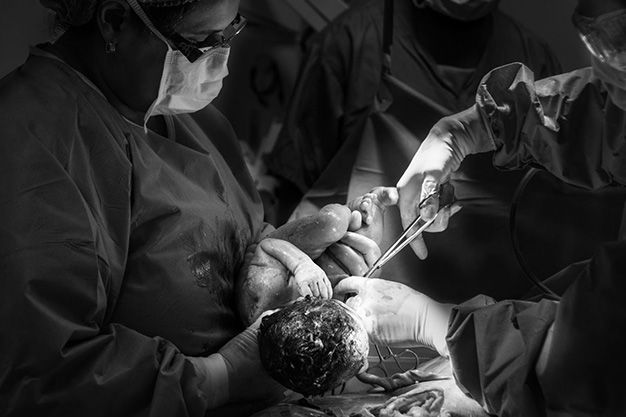 Cesarean pregnancies have become the “norm” not just in India, but abroad too. With the increasing number of cesarean surgeries, the risk associated with it cannot be ignored. These risks that present themselves as a result of a scarred uterus constitute placenta accreta, uterine rupture, maternal blood loss, anemia, fever, wound infection, breastfeeding issues, long term infertility issues in subsequent pregnancies.

These risks do not only put the mother in harm’s way but the fetus is not spared too as these complications may result in birth trauma leading to various abnormalities in the later development stages of the fetus. Of all these risks, uterine rupture is considered to be a life-threatening complication.

Pregnancies are difficult for many women out there. Ranging from issues of infertility to miscarriages, to difficulty in conceiving, some women face a multitude of complexities when trying to have a biological child of their own.

With the current trends, it is readily visible that most mothers are opting for cesarean surgery as some believe that the labor pain may be unbearable and some others are not left with any other option than getting a cesarean.

But that comes with its bag of risk. Various complications may arise out of uterine scarring ranging from uterine rupture, postoperative pain, postmenstrual spotting, painful menstruations, difficulties in passing urine, to increased risks associated with future pregnancies.

With high morbidity and mortality, particularly in less and least developed countries, uterine rupture is a serious obstetric complication. The rupture of the unscarred uterus should be rare if there is readily available and accessible obstetric care including a cesarean section for obstructed labor.

The prevalence of uterine rupture in women with previous cesarean section is of considerable importance in calculating the long-term risks associated with the primary cesarean section.

Uterine rupture in subsequent frequencies leads to a wide variety of issues including birth trauma. Uterine rupture of a previously unscarred uterus causes excessive blood loss and may ultimately lead to both the death of the fetus and the mother. In some cases, to undo the damage done to the uterus because of uterine rupture requires a hysterectomy.

In developing countries, the uterine rupture in the unscarred uterus is extremely prevalent leading to maternal death. Of all the maternal deaths in India, 2-10% is a result of suffering from uterine rupture during surgery. These put the perinatal mortality rate from 80 to 90%. In a WHO systematic review of uterine rupture worldwide found the incidence of 2.3 per 10 000 births.

Medical science has been making remarkable progress in the 21st century but undoing these risks is still a roadblock as researches are yet exploring solutions and finding better strategies and procedures to make cesarean surgeries unharmful.

For instance, some surgeons prefer the single-layer uterine closure as compared to the double-layer uterine closure. There have been reports suggesting that two sutures instead of one are better at keeping the lining intact, decreases the risk of uterine rupture in future pregnancies, and enhances wound healing. Yet, some surgeons prefer single-layer closure as it has less short-term effects.

Most gynecologists replace double layer by single-layer closure after a cesarean section to shorten surgery time and in absence of any significant differences in short-term outcomes. A single layer closure leads to a higher risk of myometrium loss leading to the development of a thinner residual myometrium lining of the uterus. This method of a single suture causes a chance of higher risk of postmenstrual spotting and possible subfertility. These risks can be prevented if the double suture technique is applied.

Moreover, when the cesarean is performed before labor, a double-layer suture has a more positive impact by reducing the impaired healing of the scar compared with single-layer closure as compared to cesarean performed during labor.

In conclusion, it can be said that the use of a double-layered suture of the uterus at cesarean, especially when it is performed before labor is helpful to optimize uterine scar healing.

What can be done?

Factors like lack of proper prenatal care, illiteracy and ignorance to access the health care system, lack of expertise to detect high-risk cases, and timely referral and poor transportation all lead to an increased occurrence of uterine rupture. The Government should take interventions to enhance the necessary infrastructure, increase budget allocation towards healthcare to address these often-ignored issues.

The government must also take into account the peripheral issues surrounding healthcare i.e. increasing transportation facilities to make healthcare more accessible. Awareness programs regarding the trajectory of pregnancies, including its involved procedures, risks, complications should be the prime focus in both rural and urban areas. The education of women and their families, as well as the general population, is imperative to understand and ask for immediate obstetric care.

Other than these factors, women must advocate for their own rights to know about healthcare involved during pregnancy. Women and families must be encouraged to have open-ended and honest conversations with their doctor and surgeon to know about the procedures and involved complications beforehand.

The trends of not communicating necessary information to the patients and families have been noticed in the majority parts of rural India. Hence, it becomes imperative to mention here that it is also the duty of the doctors to let their patients know about anything and everything that may constitute a risk.

The reports from WHO as well as various small-scale researches conducted in different parts of India have reported a very high incidence rate of uterine rupture and other major complications arising out of cesarean surgeries. The best viable option is to opt for normal deliveries, and only if that looks like an impossibility, cesarean sections should be encouraged.