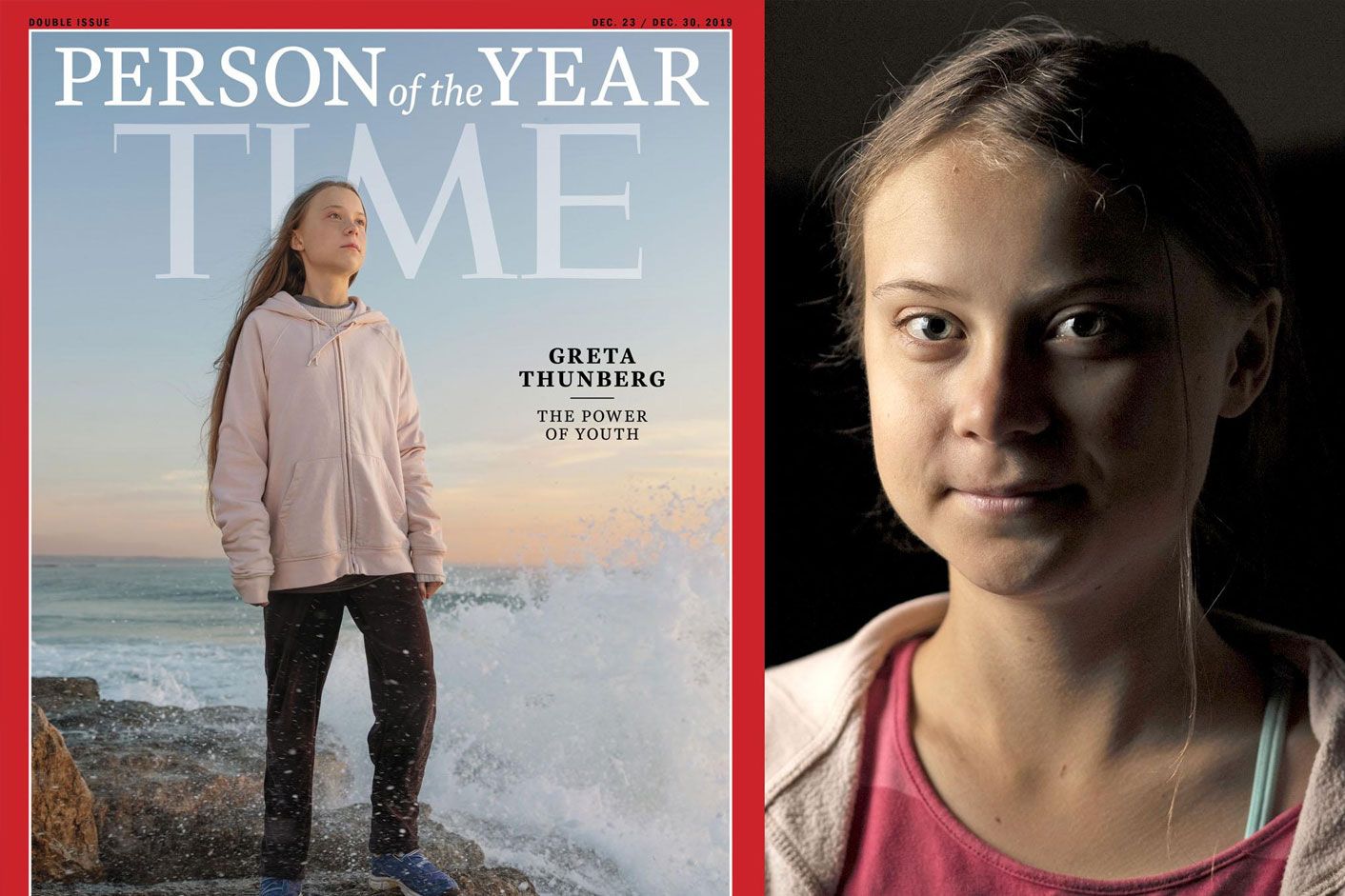 The 16-year old, simple, sweet, soft-spoken little teenager known as Greta Thunberg who revoked a climate revolution by mere voicing of her strong words has been awarded TIMES PERSON OF THE YEAR 2019! It is definitely praiseworthy and scintillating how she channelized everyone’s conscience towards climate change through a little poem of hers! The bold announcement was done by TIME magazine on Wednesday in a show called ‘TODAY’. Having possessed a strong sense of conviction and raising her voice on one of the most important yet overlooked aspects that is, ‘climate’ brought her in limelight from among a zillion! “Greta Thunberg became the biggest voice on the biggest issue facing the planet this year, coming from essentially nowhere to lead a worldwide movement”, quoted Time Editor-in-chief Edward Felsenthal.

He also mentioned “She has been the magazine’s youngest choice ever to be named as the person of the year. “Greta Thunberg faced a lot of backlashes when she stood for this cause as people thought this is just a publicity stunt. But had it been the case, then she wouldn’t have fought for the same on an individual level since 2015. Back then in fifteen, she used to fight alone against the issue by sitting outside the Swedish Parliament in her school hours every Friday. That time she was too small to even understand the concern she was fighting for! But she never lost her ground.

Even adding to it, she has held up a universally renowned hand-print sign which reads as -“skolstrejk for klimatet”, which means “School strike for climate”. Her “extraordinary” and “unthought of in history” initiative to bring students to protest for the real-life issues instead of being spoon-fed with useless textbooks, first took the shape of a big movement in the UK and later spread to the rest of the parts of the world. This ignition of conscience on the global level has been named as ‘Fridays for Future’ movement! Her conviction power as noted by Felsenthal, “prompted millions around 150 countries to act on behalf of the planet.” Further, he quoted-”

Thunberg represents a broader generational shift in the culture with having youth stand up for what they truly believe in! Young people demand change and she embodies youth activism.” Greta Thunberg suffers from Asperger’s syndrome, and first came across the concept of climate change when she was just 8 years old. Listening to the same, she immediately fell the puddle of depression, she was so heavily affected by the same. During a 2018 session of Ted talk, she was quoted saying- “I remember thinking that it was very strange that humans are an animal species, among others, could be capable of changing the earth’s climate”. Leaving meat consumption, and avoiding airplane travel, are tit-bits of what she has done to manage and reduce her carbon footprint.

In October, this year, she was being offered another award at Stockholm ceremony, & while refusing it she quoted- “The climate change is in need of no more awards, rather what we need is for our politicians, and the people in power to start listening to current, the best available science”. For her commendable voice raising initiative, she was even nominated for Nobel Peace Prize 2019, making her the youngest one to have ever got nominated for the same. Being so bold, it’s not that she didn’t face criticism.

Many notable people like Donald Trump has critiqued her saying- “She seems like a sweet girl who is looking forwards towards a bright future”, but she remained unstoppable. She chose to keep moving with her strong sense of initiation. An inspiration and a conscience to many, Greta Thunberg remains one of the most prodigal teenagers the world will ever get to witness! Instead of keeping mum, and lurking for others, she chose to speak! We, as a nation of the world, are proud of Thunberg to have proven yet another time, the potential of a female!

We are proud of her!

And we stand by her side to fight together against the wrong being done to our climate!