Women Empowerment
Sad State Of Afghani Women: How The Taliban's Return Is Awful for Women in Afghanistan 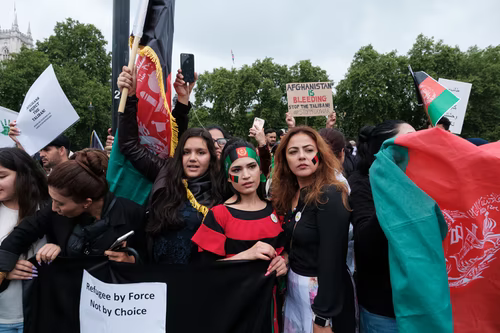 We all saw the recent uprising of the Taliban forces in Afghanistan and how the government and the country went under a massive upheaval. Amidst all the political discussions globally one concern that was abuzz on social media and media portals were: Taliban's Return Is Awful for Women!

Before the rise of the Taliban, Afghanistan was one of the safest countries for women. They were protected under the law and enjoyed rights in Afghan society. In Afghanistan, women were granted the right to vote as early as the 1920s, and in the 1960s, the Afghan constitution ensured equality for women.

Afghanistan was a progressive country slowly moving towards democracy. Afghan women were strong advocates of the country’s politics, they were active in humanitarian relief aid organizations, worked as teachers, government workers, and so on.

According to the Islamic tradition, all women and children were protected. There were special provisions that defined the rights of women in domestic areas such as marriage, divorce, inheritance and property rights, etc.

However, after almost twenty years of liberty, women’s rights are once again threatened in Afghanistan. Even though the Taliban claimed that they were acting in the best interest of women, they reduced women to the brink of human rights violations.

How Taliban's Return Is Awful for Women?

Are women safe in Afghanistan? The answer is no. The Taliban’s return in Afghanistan has proved to be fatal for all citizens of Afghanistan, especially women. The Taliban have launched a war against women. They have worsened healthcare infrastructure for women, deprived them of education, the right to religion, and made Afghanistan unsafe for them.

The Taliban’s understanding of Islam and the religious traditions aren’t supported by the world’s Muslims. Afghanistan under the Taliban is reported to have one of the worst human rights records in the world. Their regime is designed to systematically strip women of their basic human rights, repress all sections of the population, and deny them the basic provisions.

In light of these events, women’s safety in Afghanistan has become a human rights issue.

Effects of Taliban’s return to Afghanistan: Taliban's Return Is Awful for Women

The Taliban first took over the country in 1994, and by 1996 they had established a base in Kabul. The takeover initially followed over 20 years of political instability and civil war. The people of Afghanistan had hoped that the Taliban would bring some stability to the nation’s affairs while safeguarding the rights of citizens.

However, soon it was realized that wouldn’t be the case. As soon as the Taliban took control over Kabul, they began an assault on women’s status.

They perpetuated heinous acts of violence, closed the women’s university, enforced a strict dress code, forced thousands of women to quit their jobs, restricted medical access for women, and even limited the ability of women to move about freely in the city and go on about their personal affairs.

More than 50,000 single women who had lost their husbands in the civil war had no source of income. They were reduced to begging on the streets, selling off their minimal possessions, etc., to feed themselves and their children.

Also, read The Protests In Saudi Arabia Today: 14Men To Be Beheaded or Pro-Democracy Protests

As we said, the Taliban claimed that they were a progressive regime trying to safeguard women’s rights. But, the reality is contradictory. Not only were young girls deprived of the right to education and basic health care, but they were also stripped of their dignity.

Children were denied a childhood. The Taliban banned all sorts of dolls, toys, and storybooks. Young boys were given guns in exchange for children’s toys and girls were taught how to build a home.

The Taliban’s discriminatory policies violate the international human rights law. These include freedom of expression, right to religion, association and assembly, right to work, right to education, and the right to healthcare. Overall, women are not treated as people.

In urban areas such as Kabul, there is a strict dress code that women must follow. They have to be modestly dressed in a burqa or something that covers them from head to toe.

Of course, the burqa existed prior to the Taliban. However, in no Muslim country, the burqa is made mandatory for women. Women can choose to wear the burqa as a matter of personal faith and preference.

Also, read Is The Bollywood Prince Aryan Khan Being Framed In The NCB Raid Or Is It A Genuine Case?

The violation of the dress code would result in threats and punishment, including on-the-spot beatings. Further, women cannot show their feet or ankles even accidentally. There are other restrictions such as women can’t wear nail polish or anything too flashy, even shoes that make noises.

There are various restrictions in movement. For example, women are only permitted to go out in the company of a male relative. They cannot take taxis on their own. Taxi drivers can risk losing their license if they’re carrying women not accompanied by men. Similarly, women who go out on their own are brutally punished.

No Right to Education and Healthcare

Since their takeover, the Taliban ended the education of girl children. In 1998, a law was passed that banned girls over the age of eight from attending schools. Homeschooling was initially allowed but later stopped.

Besides, women are given the most rudimentary access to healthcare. The regulations have led to inadequate medical care and have contributed to the suffering of women, and increased the female mortality rate.

The United States has been assisting Afghan women since the 2000s. They are the largest individual donor to the Afghan humanitarian organizations. However, the final U.S. troops departed from Afghanistan earlier in August. This has ceded the country to the Taliban’s sole control. Taliban's Return Is Awful for Women is the common consensus among everyone and only time will tell the verity of this statement.