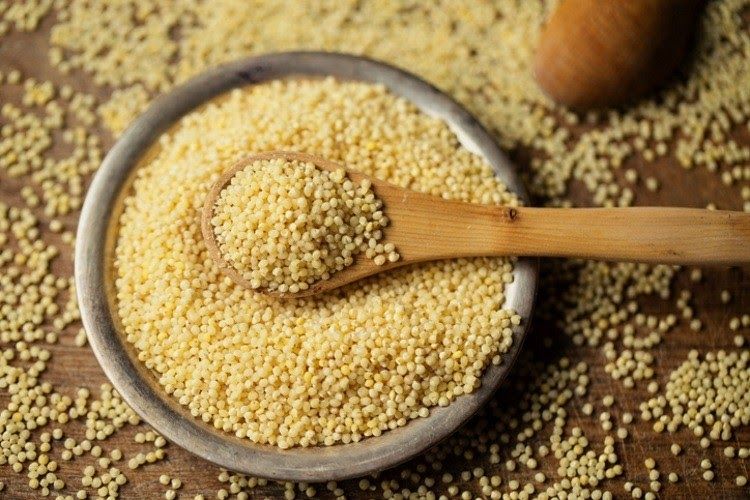 Grains are great for maintaining healthy eating habits. Have you ever heard about this superfood which is known to replace the most popular grain, Quinoa! If you don’t then it’s time you should know this super healthy and one of the oldest harvested grains, Fonio. It is a West African grain which is a type of millet and an ancient grain.

Also, Fonio is gluten-free as well! If you are looking for healthy grains to eat for a healthy lifestyle, Fonio can be a great option. Want to know what is fonio, fonio uses and fonio benefits?

Read on to know more about it!

Fonio is an African heritage grain which is considered as one of the oldest cultivated cereal. It is native to West Africa. Fonio is locally known as ‘acha’ or ‘acca’ is a super grain that is delicious, gluten-free and nutrient-rich. It comes from the millet family. It has a light nutty flavour and its texture is like a fluffy couscous.

Fonio is packed with iron, amino acids, zinc, phosphorus and Vitamin B1 and B3. It can be cooked easily and a good alternative to rice, quinoa, couscous or polenta if you are looking for a change.

Not only is it a nutrient-rich super grain but it also offers a life-changing income to women in Africa and restores degraded soils. It is also gluten-free meaning, it is not a superfood for good health but a hope for a better future by creating sustainable livelihoods in one of the poorest regions around the world.

Fonio is culturally significant in numerous sections in the West African countries as it has been used in various ceremonies. Although it is an ancient and highly cultivated grain, it is poorly utilized and underestimated.

Fonio is an amazing source of B vitamins including thiamine, riboflavin and niacin which are essential nutrients for the growth, development and function of cells as well as energy production in the body. Fonio is considered to have the highest calcium content of all grains. This makes fonio a great choice for those who don’t contain dairy in their diet like vegans or people with lactose intolerance. Fonio is also a rich source of iron, copper, zinc and magnesium. It offers a moderate amount of fibre and protein.

Fonio is considered to be one of the hottest food trends of 2020 because it is known to replace quinoa. In addition to it, it is also called a “miracle grain” as it helps in bringing prosperity to numerous areas in West Africa. Not only is it healthy but when cooked, it makes mouth-watering cereal for your taste buds. Fonio has a lot of health benefits and is suitable for any diet. Here are some fonio benefits you should know about:

The most amazing feature of this super grain is that it is naturally gluten-free. It is suitable for coeliacs and those who have a gluten intolerance. People who have gluten sensitivity may experience abdominal discomfort and tiredness after eating food containing gluten. Gluten is a group of proteins that is found in wheat, barley and rye.

Fonio is reported to have no toxic effects for people with gluten intolerance as well as for people having celiac disease.

Fonio is diabetic friendly as it contains resistant starch which has many health benefits that play an important role in boosting insulin sensitivity and lowering blood sugar levels. Also, this grain has a low GI (glycemic index) score which means that it doesn’t suddenly raise your blood sugar levels. It contains higher amounts of insulin-secreting amino acids including valine, leucine and isoleucine compared to other cereals.

Amino acids are essentially vital for human health and they are building blocks of protein which is crucial for the growth and development of the body. Fonio is rich in amino acids which are important for human growth and metabolism which are much deficient in major popular types of cereals including wheat, rice and maize. The two sulphur-containing amino acids in fonio are important for the skin, nails, hair and overall health.

Fonio is packed with iron, containing about 4.6 mg per 100g. Iron is an essential mineral required for the body to support a wide range of benefits from fighting off diseases to giving energy to the body, reducing fatigue and tiredness. The high content of iron in fonio makes it a perfect choice for people with anaemia and iron deficiency. By adding fonio to your diet, you can achieve a lot of benefits related to your immune system.

How to use Fonio?

If you think fonio is a “boring kind” of cereal, you might wanna think again as fonio is pretty versatile and has an earthy taste that absorbs the flavours of foods prepared with it. There are numerous fonio uses including using it as a porridge, adding it into beverages, using it in baked food like bread, cookies and cakes.

You can replace this yummy cereal in place of your every day cereals like rice, quinoa, millet, couscous and barley. You can also use it to garnish your salads, stews and soups.

How to make Fonio?

Just follow these steps to make a delicious fonio porridge:

This was all about the super grain Fonio. Have it for a change, not just for your taste or health but also for numerous livelihoods.

Read Next: Muesli Vs Granola