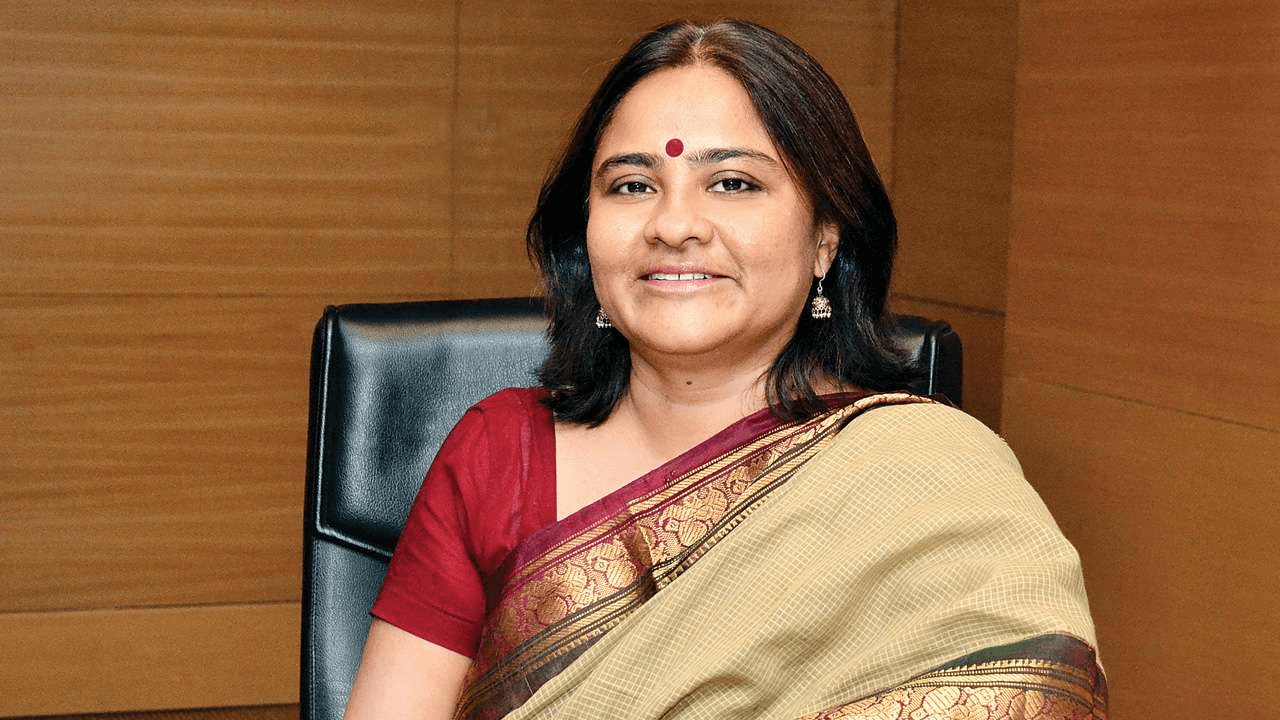 Sangeeta Prasad, former CEO & MD of Mahindra Lifespaces, is a self made woman with multiple talents and achievements. She joined the Mahindra group in 2008 as the COO of the Mahindra World City Developers and has been a member of the Group Executive Board.

As part of the Group Executive Board, she has led various group-level initiatives Prior to this, she worked in Tata Steel for 16 years, where she has led businesses and functions very successfully, across multiple geographies. She has been all along a fast tracker, respected for her business and people leadership and her thought leadership in sustainability.

Sangeeta is an Electrical Engineer from Jadavpur University and holds a management degree from IIM Lucknow. She has been a continuous learner – a Chevening Scholar, an INsead alumnus and was later a part of the Mahindra  Future Leaders program curated with Yale and IMD, Lausanne.

She has been a keynote speaker at various prestigious forums including the World Economic Forum in Davos and COP21 among others. In a career spanning 28 years, she has shown her tenacity, passion, and commitment towards her work that has led her to be one of the most successful and respected executives. She was on the Board of Governors of IIM, Lucknow for two successive tenures.

Sangeeta, in her free time, is a bibliophile and loves to read classics and fiction, one of her favourites being the works of Rabindranath Tagore. When she isn’t jet-setting across the world she loves watching movies and her favourites are the classics like “Shawshank Redemption” and Ghare Baire (Home and the World) by Satyajit Ray.

We at The Voice of Woman, caught up with her, as she prepares herself for the new chapter in her journey. We wish her all the best in every future endeavour. We caught up with her for a candid and insightful chat about a woman’s changing role in society and breaking the glass ceiling of gender stereotypes. Read on to learn more.

A woman is supposed to make a home, but when Sangeeta Prasad constructs one- it often hurts the popular sentiment of the society- your views on it?

Whenever anyone raises that, I just retort, either way, I am a homemaker! On a serious note, there have been centuries of social construct, which are getting challenged and also changing. Education, sensitisation, working on perceptions, role models, plain and honest hard work and time will do it. We have to be resilient and make our choices, undeterred and unfettered.

Heading an organisation requires one to spend long, gruelling hours, how do you balance work life?

Frankly speaking, work and life are not two compartments but are parts of a composite whole. It is how we maximise utilisation of the most important resource- time, which determines how effective we are.

Balance your time and mind for all three stakeholders of life- the organisation, family, and self helps me to be rejuvenated and better prepared to take on the challenges of the next day.

Interviewees often face rejections which can affect their morale; did you encounter similar situations at the beginning of your career? How did you deal with it?

Rejections are always a part of life as it has been of mine. Interviews are just one aspect of life and I would say that the immediate outcome of a rejection of any type is sadness and at times despondency or inadequacy.

It is what we do thereafter become critical. Picking up the thread quickly, understanding what was the learning, seeking feedback, and working on them wholeheartedly can help one to move forward.

It is not easy, but having the grit is essential. Of course, seeking candid advice of your loved ones or close friends at that time can give both solace and strength to bounce back in life.

You have a degree in Electrical Engineering, something that is often considered a man’s discipline, how difficult was it making your mark in this field?

Girls are not good in Maths or Physics, or they can’t drive or let them do humanities are all myths and stereotypes that have been built over decades and centuries. Madame Curie had to face it and so have many other women achievers in various fields.

You just have to be at it, excel in what you do. You would need to persevere, be humble, and stay focused. People have started to understand and acknowledge this, and many of my colleagues would swear by it as they see the results on the job and nothing there is more effective than seeing real-life examples.

Self-belief is very crucial in the journey of breaking type cast moulds and having the support of family members go a long way in a woman’s success.

Do you feel that work from home can help increase a woman’s participation in the workforce?

It can certainly but I believe that’s just the tip of the iceberg and many more aspects have to be considered.

It is very simplistic to think that just work from home can enhance a woman’s productivity in work as there are many other facets to it. The social construct is such that a woman’s participation in running a household is much greater than that of a man. When a woman is at home whether she is a working woman or a homemaker, she is always the go-to person for everyone.

By being at home, like a man, she can contribute to work and reduce the time for commuting and other logistics. However, unlike a man, a woman is expected to contribute more in-home affairs like the demands of a child, or for things in the kitchen, even while she is working. But a man can get away it much easier.

When she is at the office she can be completely focussed on the work at hand because there is nothing else interrupting her. So, WFH can often put that extra burden on her, especially for a young mother or those who have access to limited space in their home or stay in a joint family setting. Often the woman has to sacrifice her work station at home for the man. It is a very gender agnostic situation that one has to tread.

However, WFH can prove to be beneficial for those who are homemaker, then this will allow them to make a significant contribution.

Has a woman’s involvement in an investment in real estate changed over the years?

As family constructs are undergoing change, so is the process of decision making and collaboration in buying outcomes. We see more and more progress and also today, many women are independently taking such decisions. Women today have become financially independent hence, they are more empowered.

When a woman is an over-achiever and earns considerably more than her spouse, do you feel it creates an ego clash?

It does and has to be handled with sensitivity and grace between both partners. I have seen women and men making a great fuss about it, where there should be none. It is sometimes gets fuelled by other family members, and such intrusion must be vehemently discouraged by the partners.

After your resignation as the CEO & MD of Mahindra Lifespace, what is next for you?

I want to spend some me-time and relax, which is much needed since I have worked hard for a long time now. As I prepare for the next part of my journey, purpose and happiness are the key drivers to it.

What is the most important life lesson that you learned from your illustrious career spanning over two decades?

It’s been 27 years of an exhilarating and rewarding journey and giving me the insight for the next chapter.

Happiness and pursuit of excellence are what drives me to move forward and that is what matters ultimately. I think this is the most invaluable lesson that I learned from my life.

Share a message for the readers of The voice of Woman

Have the courage to choose and show empathy towards others, and be responsible for a purpose and pursue happiness. Always remember to be comfortable and proud in your own skin while being humble.