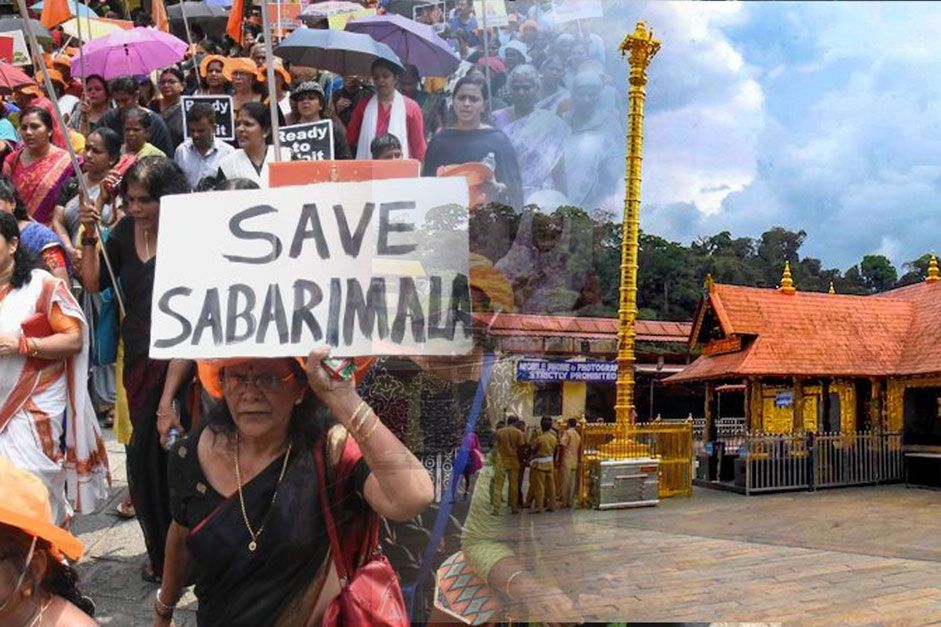 Sabarimala Temple inside the Pathanamthitta District, Kerala dedicated to Ayappan, the Hindu God of Growth particularly popular in Kerala. It is the site of one of the largest annual pilgrimages in the world with almost 15-70 million devotees visiting the temple every year. The bizarre fact of the temple is that women of the menstruating age (10-50 years) are barred from entering the temple. It is considered to be disrespectful to the celibate nature of the deity in this temple. In 1991 the Kerala high court judgment had legalized this interpretation and forbade women from entering the temple. In September 2018, The Supreme Court of India passed a ruled that all the pilgrims regardless the gender, should be allowed entrance to Sabarimala Temple.

The Constitution Bench of Supreme Court stated that the band violates the right to equality under Article 14 and freedom of religion under Article 25. This verdict led to oppose by the people who are against it. Several women attempted to enter the temple despite being threatened, but failed to reach the ‘sanctum sanctorum’. Two women belonging to the previously barred age group finally entered the temple defying protests on 2 January 2019 with the help of police through the back gate. Thereafter, Temple was closed for  ‘purification’

Lakhs of women joined hands to form a 620kms long human chain from Kasargod in north Kerala till Thiruvananthapuram in the south against gender equality. Gender activists meanwhile, contested that this rule is discriminatory and opposes the basic Human Right of Equality. They have also challenged the belief that women are ‘impure’ when menstruating and that this ‘stigmatizes’ women.

Last September, a five-judge bench headed by the then Chief Justice Deepak Misra, was to be reviewed on November 14. The verdict had invited sharp criticism from the conservatives who accused the court of meddling with faith. Almost 65 petitions had been filed against the verdict. A five-judge bench, now headed by CJI Gogoi, and comprising Justices RF Nariman, AM Khanwilkar, DY Chandrachud, and Indu Malhotra, heard the pleas and reserved the judgment on February 6, 2019.

The verdict created a stir amongst the political parties.  While the Pinarayi Vijayan-led LDF government welcomed the apex court’s decision on the matter, the BJP, along with other right-wing ideologues, has maintained that court shouldn’t intervene in matters of faith, in what was seen as an attempt to get a toehold in Kerala. The congress, on the other hand, opposed the judgment saying it was “representing the emotions of people of Kerala.” Former party president Rahul Gandhi said he was in favor of gender equality and women of all ages worshipping at Kerala.

A five-member Constitution bench headed by Chief Justice of India Ranjan Gogoi referred the case to a seven-member bench by 3:2 majority. On Thursday, the Supreme Court referred the matter to a seven-judge Constitution Bench of the court to be set up by the next chief justice Arvind Bobde. Since the Supreme Court has not stayed its earlier verdict allowing women without an age bar to enter, the government will have an uphill task in managing peace in the premise. The court has endorsed its stand that the traditions of the temple are to be followed. “The decision the five-member constitution bench is a relief and hope for the devotees. I hope that nobody will meddle with the faith and tradition of the temple,” said Chief Priest of Sabarimala Temple.

It is a shame that after 70 years of independence, our “democratic India’ still carries these norms. Following gender inequality in the name of religion is taking India backward. Menstruation is a natural cycle created by God which is the foundation of life existence on earth, how can it be impure? If God believed women to be impure while menstruating, then he would have never made women like that.