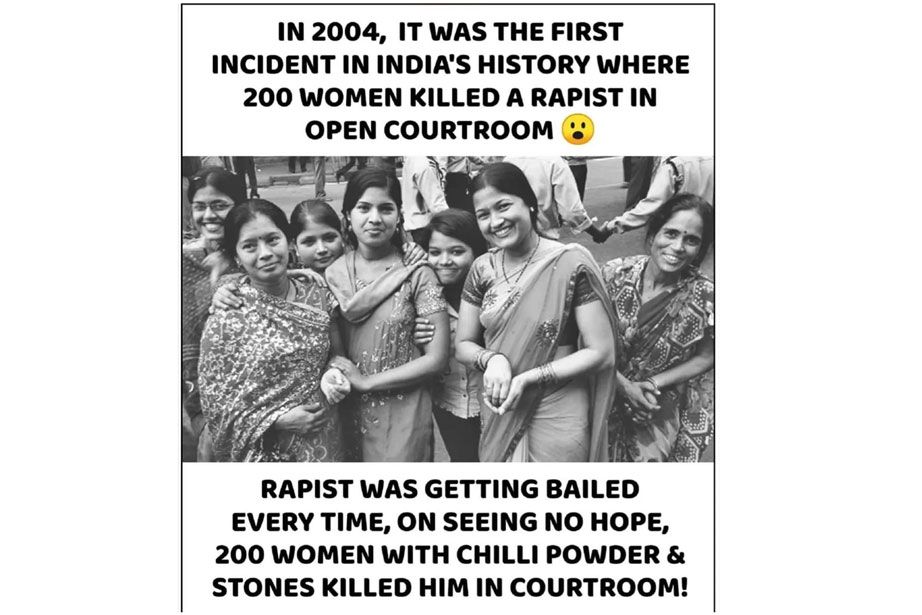 Ever heard an incident where the rapist was even lynched?

Let alone lynching, ever heard that the rapist was shamed by the society???

No, because we inhabit a society where we tend to depend on the machinery of state to serve us justice, however long it takes! But in a strange yet real incident, justice was self-served by a throng of 200 women who went on to lynch the lyncher of their existence! Having witnessed a rarest of the rare incident, time shivered as it saw one of the most gruesome justice in the broad daylight of August’13, 2004 within the premises of Nagpur District Court. It’s the case of Aku Yadav, a monstrous rapist who according to the women of Kasturbanagar in Nagpur raped every second girl on gunpoint of the acid attack, or murder. Ranging from teenage girls to married women he never let his prey flee!

Moreover, he received police protection as an accomplicement to his crime. Every now and then, he would get out on bail, which added the word ‘over’ to his existing level of confidence. With time, it became a normalized idea for every slum of Kasturbanagar to live with one rape victim at least. Also, having invested their trust in the state machinery, when women went to lodge an FIR, then the policemen would pass ridiculous comments on them for being a woman of ‘loose character’. The last prey he preyed on was Usha Narayane who happened to be a lawyer and was threatened by Yadav with a potential acid attack. After that, the women launched a campaign against him and took their request to the police to take stringent action against him. He was taken to custody but then later there were rumors of him being out again on a bail.

So, women decided to take destiny in their own hands. Aku Yadav was to be brought to the Nagpur district court at 3 pm on 13th August 2004. Following his path to the courtroom, 200 women bumped on to him and lead him to death by injuring him with stones, and by putting chili powder in his eyes. Moreover, a victim even chopped off his penis. After all this, 70 stab wounds were given on his body. All of this followed by in just 15 minutes.  The last incident which led him to this fate was when once Usha Narayane saw him call one of his victims as a prostitute supported by a small grin from two policemen escorting him. Not just him, even his nephew was lynched the same way in the year 2012! The women who lynched the man in both these incidents are still moving in and out of the court for the act, they have committed.

In another recent heinousity, that preyed over Priyanka Reddy, a vet doctor from Telangana; policemen took things in their own hands bravely and killed all four accused in an encounter; hence serving the perfect tribute to the victim. It was then, that social activists and other officials pointed out how delayed justice system can make people take things in their own hands. We cannot sit and watch every second incident ripping us off our souls! Justice needs to be served and should be served well in time. The above-quoted incident reflects the loopholes of our judiciary machinery and how such cheap criminals can cause havoc by being out on bail. We need a more stringent and well-improvised system according to the current environment.

“The dictator feels supreme, only till the crowd is unknown to its strength; once that is acknowledged, one ceases to be a dictator anymore! ” ~ anonymous