Masked But Not Silent: Lilly Singh’s ‘I Stand With Farmers’ Making The Right Noise 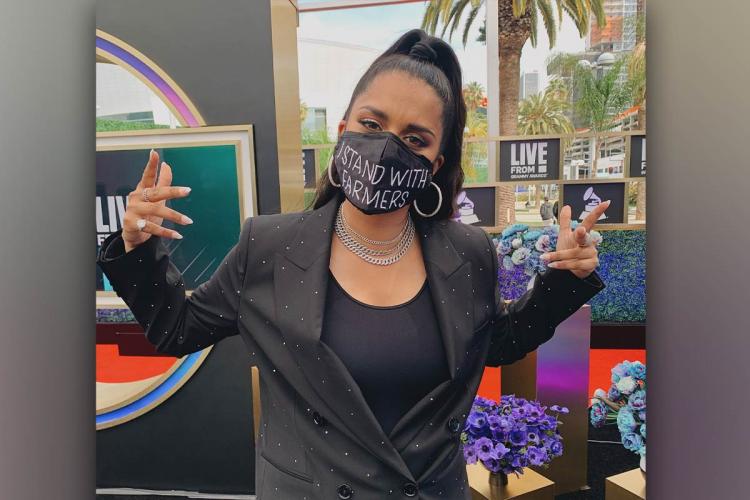 Social media has perhaps been the only source of reliability when it comes down to reaching out to the people at large. Similarly, the situation in India went tense with the initiation of the new farm laws by the central government. There have been multiple attempts by the farmers seeking amendments in the newly made pieces of farm legislation. The methods adopted by the farmers all over India were that of protests by resorting to hartals, processions, etc. lets read more on the initiatives taken by Lilly Singh for the protest.

The issue went on aggravating with time as the government paid no heed to it. The main issue that had cropped up is that the farmers started to view the farm laws as a gate-way to their destruction in terms of economic benefit that they would derive.

In reference to the policy of contract-farming, the farmers believed it to be a source of indebtedness and loss of autonomy on their part. All of it accumulated together raised a situation of hue and cry not only among the working class, but also the famous personalities in India as well as globally.

The Global Out Reach Phase

A remarkable incident that had taken place in the recent past has put people to think and rethink the status of the struggling farmers. In no time, the farmer’s protest was recognized not only as a part of India alone but also based on a worldwide perspective. Right when India was in the middle of it, Rihanna, one of the most famed music artist, put forth her support in favor of the struggling farmers in India.

The Twitter platform proved to be a means for her to come up and support Indian farmers to fight with the ordeal at hand. Following the same, Lilly Singh, a celebrated YouTuber reached out on the Twitter platform with her words “Yes! Thank you so much. This is a humanity issue! #IStandWithFarmers and this narrative are TIRED”.

Apart from this, other international celebrity stars had also come up to the forefront with their valuable words in support of the Indian farmers fighting for their share of rights. That’s where it all began.

Another big resentment initiated by Meena Harris, the niece of the United States Vice President, depicted a concern towards the very essence of democracy prevailing in India. In regard to the internet shutdowns and parliamentary violence, her statement stood out as a strong remark spread all over the internet.

When humanity is put at stake, it is not just individuals fighting against it, but the entire world at large is put into the same situation. Having been said that, the Grammy awards 2021, took the world by craze when Lilly Singh, an Indo-Canadian YouTuber walked the red carpet with the ‘I STAND WITH FARMERS’ mask.

Also, posting a picture of the same on her Twitter handle, was a complete sign of solidarity that she tried to convey in regard to the ongoing farmers’ protest in India. With her valued statements of confession on the fact that award shows are the most covered on media, her initiative stood out to be loud enough to reach out to the world.

Following her post, Indian actress Swara Bhaskar placed a comment on her post supporting the action. This initiative of hers provided an opportunity for other music stars to cooperate and put forth their symbol of support towards our farmers.

The only good aspect about covid is that it created the idea of face mask being part of the lifestyle and trend. However, with that, the utility provided by Lilly Singh proved to be beyond the anticipation of normal parlance. Besides the fact that there had been multiple head-turning moments on Grammy awards 2021, the farmer’s protest undoubtedly was one hell of an applauding factor.

Though other celebs were lending their voices to the agitated movement taking place in India, the hue and cry certainly needed the ideal attention that it sought for. Being a part of the music industry, Lilly Singh tried to establish her support on an international level without any piece of hesitation.

The black face mask with a little caption engraved on it was capable enough to turn heads towards an issue that certainly needs to be addressed. It is not just about the present scenario in India, even on having been reached out on a global scenario, it is a personal opinion, moral, ethos, practices, etc. that vary from person to person. Despite the fact that the agitated movement has some of its supporters, criticism always remains on the contrary.

Even today, on considering the arguments of the central government and the representatives of the farmer’s protest, the most crucial aspect, that is, the question of what is right and what is wrong is yet to be addressed with proper and reasonable justification. But, one can hope for a better tomorrow in terms of better economic conditions and other vulnerable aspects prevailing in India and also all across the globe. with efforts on an individual level, one ought to be contributing to a country’s overall development.

Women have always proven to have added an inspirational turning point in society. This article depicts some of the recent instances that validate the existence of such truth prevailing in the society since time immemorial.