Know When Casual Intake Of Alcohol Can Be Life-Threatening 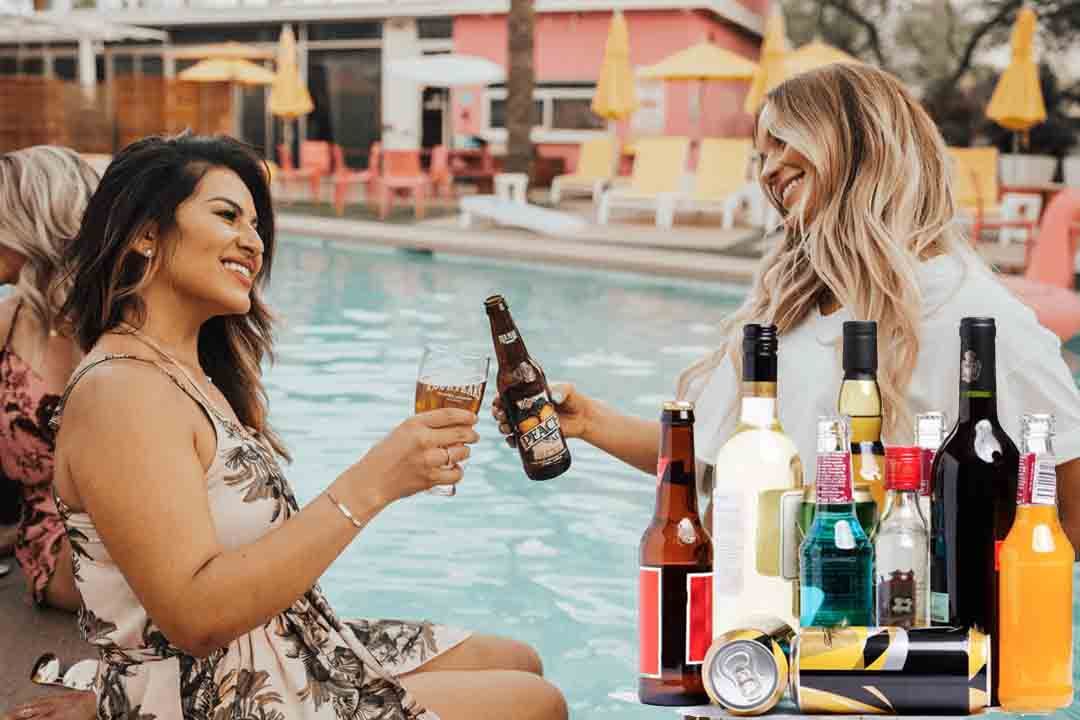 There’s absolutely nothing wrong in having a few cocktails, a glass of wine at dinner or occasional, wild drunken nights with your friends. But sometimes, things may get a bit out of control. You may not realize that hitting the bar every now and then or finishing that bottle of wine all by yourself can lead you to excessive alcohol intake.

We don’t intend to scare you. But, let’s be honest, it really is tough to tell when casual or social drinking (as it is commonly known), has turned into alcoholism. Too much of drinking may start taking a toll on your everyday life.

Drinking is meant to be fun, right? So when does it turn nasty and potentially becomes a serious problem? This is a question that crosses a lot of people’s minds. And most often, they fail to realize the difference between casual drinking and problematic drinking. So what exactly are the signs that your casual drinking habit is turning into a real problem? Read on to find out.

What is Alcohol Dependence?

Alcohol dependence is widely known as ‘alcoholism‘, which is the most severe form of a drinking problem. Individuals who face alcohol dependence find it hard to predict how much they will drink or when they will stop. The main concern is what they will do while drinking. For such people drinking plays a vital role in their day to day life, which results in developing withdrawal symptoms if they try to stop.

It is important to note that alcoholism doesn’t always mean an excessive level of drinking, there are differing degrees of alcoholism. You are more likely to become addicted to alcohol without even realising. If an individual finds it challenging or hard to enjoy or relax without a daily alcohol intake, they could have grown psychologically dependent on alcohol. Physical dependence leads to withdrawal symptoms, that is you experience things like sweating, shaking and nausea.

Here are the 3 major types of alcohol drinkers

Casual drinkers are also known as social drinkers. As the name suggests, these people are the ones who drink alcohol occasionally. It is seen that they habitually drink responsibly which means they don’t pass out regularly. It is a safe alcohol intake which is okay.

Whereas, problem drinkers are considered to have excessive alcohol intake. They tend to consume alcohol more than they are supposed to, which makes them regret it later.

People who are alcoholics find it very difficult to control their consumption of alcohol. Most alcoholics tend to drink daily. They typically encounter difficulties in multiple aspects of life because of how much or how often they drink. Such kinds of people possess to have too much alcohol intake.

What Results in Alcohol Dependence/Alcoholism?

Normally there are many factors which add to someone transforming to alcoholism. Alcoholism can be inherent in families. It is partly rooted in your genes, but also determined or impacted by your family’s views on alcohol and also the circumstances you grow in.
One of the factors is stressful incidents, for instance, grief or losing a loved one. This contributes to excessive alcohol intake. This is the most common factor which leads to alcoholism. Because people are not strong enough to face stressful situations and avoid this by doing things which makes them forget their distress.

It is seen that people who face alcoholism hold greater rates of psychiatric disorders than people in the general society. Psychiatric disorders like anxiety, depression, drug misuse and post-traumatic stress disorder. Often these people to reduce the symptoms, which is known as ‘self-medicating’ choose to drink. But excessive alcohol intake makes these disorders more critical as it intervenes with the chemical balance in our brains.

Mental health problems such as anxiety, depression and in some cases even suicidal emotions. This develops when you start a daily alcohol intake more than usual. As people who drink often stop with neurotransmitters in our brains which are required for good mental health.

Being an alcoholic can influence your relationships with your family members, friends and your companion too! As your drinking problem is affecting your loved ones this might result in distress and eventually, you could face severe issues like losing a job, heading to financial problems as well.

If an individual believes that their mental health is enduring because of their drinking habits, but finds it difficult to stop, they should seek professional help. Alcoholism can also make you more aggressive.

Effects of Daily Alcohol Intake on the Body

People who are alcohol dependent or alcoholic can direct to a complete range of severe health problems. If one is dependent on alcohol, they enhance their chance of developing high blood pressure, stroke, coronary alcohol-related heart disease and liver problems. Continued heavy drinking ruins your liver.

Warnings and Indications of Alcoholism

In case you are concerned or worried that you may be converting alcohol dependent or even concerned about someone else’s drinking habits, you should go through these warning signs and symptoms:

1. Inability to Limit Yourself

This is the most notable sign of alcoholism. If you find yourself drinking four cocktails instead of 3 or drinking endless amounts till you literally pass out, then it could be a serious problem. If you always try to control yourself but fail to do so, then you may be struggling with a real issue.

2. Drinking Sneakily or Lying About Drinking

Denial is quite common with people having problems with alcohol. Therefore, they may drink secretively or they may lie about how much they drink. Or they may even deny drinking altogether. This is a very important sign of alcohol addiction.

Withdrawal is the reaction to the lack of alcohol in your system. If you are also the one who starts feeling anxious, nauseous, tired or depressed when you haven’t had alcohol; then there’s some serious issue right there. Other notable signs include trouble in sleeping, losing appetite, experience shaking or trembling, or all of the above.

Are you regularly missing work? Fighting or arguing with your loved ones? If you’re too much intake is interfering with your work, school/college or household, then you’re having a major issue. If it is seriously impacting your day to day functioning then you are overdoing it and you need to stop immediately.

5. Drinking More Than Your Usual Amount

We tend to build up tolerance to alcohol over time. But an intense tolerance to alcohol i.e. the desire to drink more and more in order to get drunk is something to look out for. This indicates that your body is exposed to alcohol frequently and thereby it has adapted to cope with it. And, this is definitely not a good sign.

We’ve all dealt with drunk calling, drunk texting, or being too out of control. But when these issues go too far and are straining your relationships with your near and dear ones, then it’s time to deal with your drinking problem seriously. It’s an indication that you prioritize alcohol over the relationships in your life. And it’s not a good thing.

7. Having Too Much Hangover

Drinking in moderate amounts is totally acceptable. But when you wake up with a heavy head with not even an inch of a memory; then it’s another red flag for a problem with alcohol. It’s a sign that you are going too overboard with drinking.

8. Drinking to Relieve Stress or Pain

If alcohol is the one that you resort to while in distress, then you are doing it the wrong way. People tend to excessive alcohol intake when in stress as a way to self soothe. Drinking should be a social thing. Not something to use as an emotional crutch. There are numerous other options to keep you off of distress like hanging out with friends, exercising etc.

9. You’re Trying to Quit But Unable To Do So

Alcoholism doesn’t go unnoticed.  If you have ever feel guilty, or it has ever crossed your mind to quit it, but have been unsuccessful in doing so, then you should really consider getting some additional help. If you have thought of it then it means that you are willing to leave it but your constant urge to drink is making it impossible to do so. Therefore, getting consulted with a therapist can greatly help you to do so.

Though there are major negative health effects of alcohol intake; there are some subtle signs on the outside too. If you’re a heavy drinker, then you’ll always feel and look tired, sallow or haggard. You’ll feel too drained to do any work. Whether it’s at work, at school/college, at social events or at home. It could be your body trying to indicate something to you something.

11. Devoid of Any Other Activities

Sipping some great wine along with your friends on a weekend is really fun. But take due note if it is the only pastime that you seem to enjoy. If you find yourself taking the Centre stage in drinking at all your social events or you find yourself cutting back on all the activities that don’t involve drinking; then it can prove to be quite harmful. It’s a sign that you are having excessive alcohol intake.

12. Your Loved Ones are Concerned

You may take their sayings lightly but you should take your near and dear ones seriously. They are concerned about you and will notice the signs of alcoholism before you realize it yourself. Overcoming it would be the righteous thing to do for both you and them.

Word of Caution (Control On Your Alcohol Intake)

Having a safe alcohol intake can help you keep your heavy drinking under control. Here are some ways which might help you reach your goal:

One can try and find alternative methods to deal with stress instead of increasing the daily alcohol intake . So, after a rough day, they can choose to go for a walk, join a yoga or dance class, talk to a friend or a family member about what’s troubling them.

One should keep track of what they are drinking. Also, consider having alcohol-free days. If you tend to drink frequently because your physique begins to develop a tolerance to alcohol. This is one of the chief objectives why doctors recommend taking regular days off from drinking to make sure that you don’t become an alcoholic.

The solution is to be able to identify when casual drinking is turning to alcoholism and seeking professional help. If we can diagnose alcoholism at an early stage then it is possible to prevent various side effects which follow it. We should remember that many people across the globe fight not only alcoholism but also heavy drug usage. They have been able to recover as they chose to seek help instead of ignoring it. Help will always be given to the ones who ask for it.