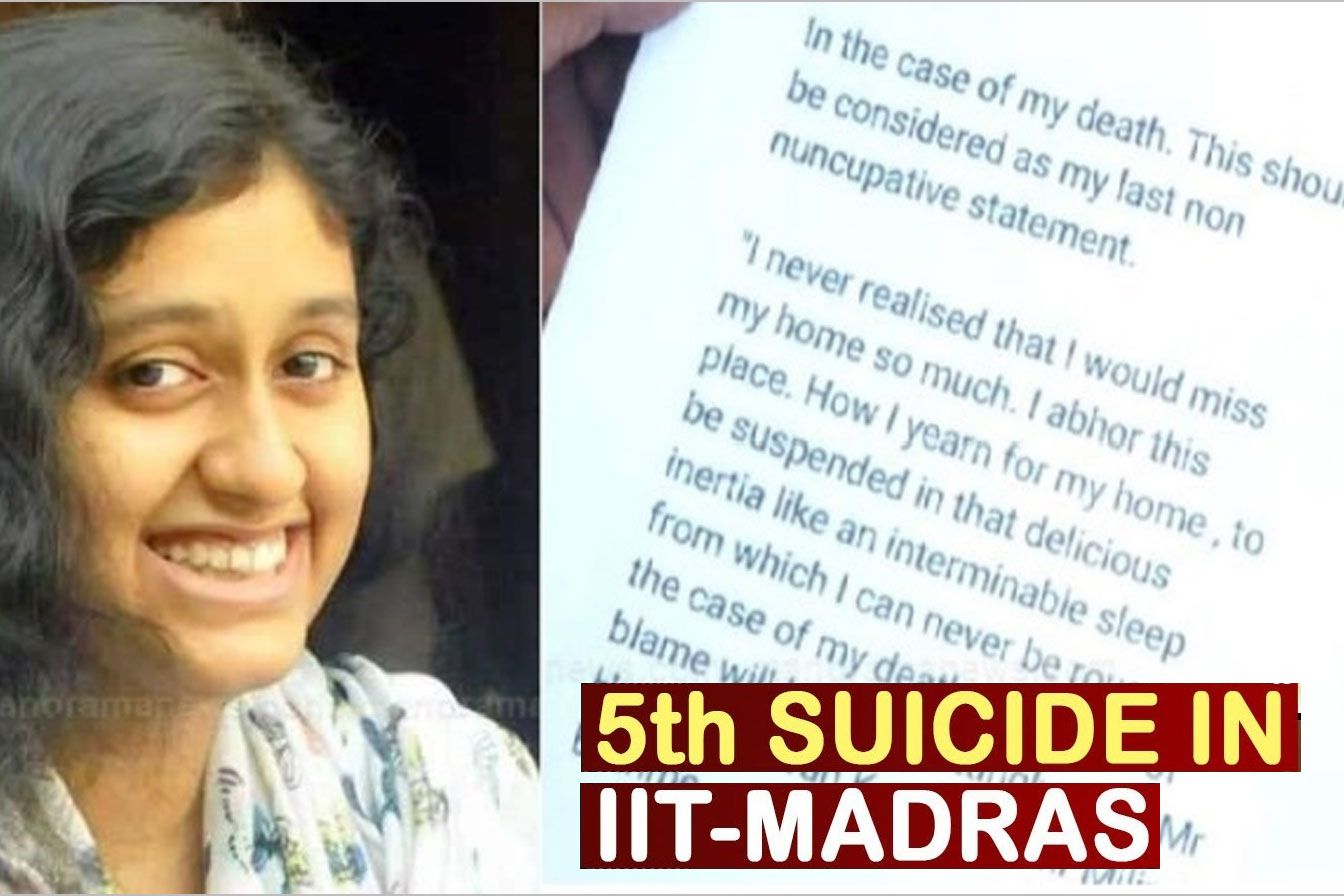 This children’s day will be rather grim for Fathima Lateef’s family. The 19-year-old class topper took her life last Saturday. In the suicide note, faculty members were blamed for being the cause of IIT student death. Since then, politicians and parents of the deceased have demanded a CBI investigation to look into the matter.

Some reports say that Fathima Lateef was found hanging in her room while others say that she jumped from the fifth floor and ended her life. However, a suicide note was discovered from her cell phone. In the note, she talks about how much she missed her home and hated the place she was at.

She wrote, “In the case of my death, this should be considered as my last non-nuncupative statement.” Following up, she also wrote, “In the case of my death, the whole of blame will be unremittingly upon Mr. Hemachandran Karah and Mr. Milind Brahme,”  In a separate note found on her cell phone, she blames another faculty member “Sudharshan Padmanabhan” for being the suicide cause of death.

According to M.H. Jawahirullah, leader of the political party Makkal Katchi (MMK), Fathima Lateef ’s father told him that a professor had given her three marks less. But, the marks were corrected once it was brought to the Head of Department’s notice.

Fathima’s father alleged that the Tamil Nadu Police did not take the investigation seriously. The parents approached the Chief Minister of Kerala Pinarayi Vijayan to seek support for a fair trial. “CM has assured all support to us. CM said that the Kerala government will take this very seriously.”

In a brief statement, the IIT Madras expressed grief over the unfortunate death. “IIT Madras faculty, staff, and students extend their deepest condolences to the family, friends and other near and dear ones of the deceased student. This is indeed an irreparable loss to the institute and the family. May her soul rest in peace.”

It should be noted that five suicides have taken place in IIT Madras in the past year alone. According to some students, IIT Madras came out with a statement that said that the department had no role in the tragic case of Fathima’s suicide. Some students protested over this insensitive message that was posted on the department’s bulletin board.

It is surprising how the “IIT Madras student commit suicide case” has not taken any action on the teachers involved. While it is fair to wait for the trial to begin and for the teachers to be proven guilty, it is unfair to allow them to continue teaching, knowing how their discrimination may have driven an IIT student to commit suicide.

Many questions arise with Fathima’s death. If similar cases of student suicide in India had happened before, what measures did the institution take to ensure that it would not happen again? Why was Fathima’s case not looked into when she had even approached the Head of Department for unfair deduction of marks? And why is the institution in such a hurry to clear their name and to separate itself from suicide when they should be helping the investigation?

Students work day and night to get into the institution of their dreams and build a bright future. But unfair means, bias, and bribery kill millions of dreams across the nation every year. Who is to be held responsible? Fresh school pass-outs do not have the money or the source to fight people in power. Unfortunately, some of them succumb to the pressure.

Teachers and colleagues have a moral obligation to come forward if a person in charge is being biased towards anyone. Although we cannot fathom the pressure and humiliation that Fathima and other victims might have faced, suicide cannot be a way out. Students have to understand that there is no better way to defeat oppression in any form than to stand in the face of it and fight for your rights.  As of now, the Central Crime Branch will be handling the case.