Dark Side of Women Working From Home In COVID Times! 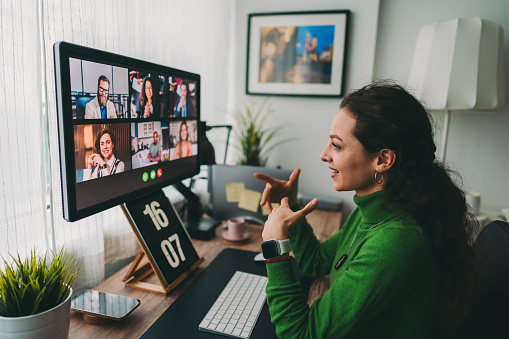 For working women, work from home is both a blessing and a curse. The COVID-19 pandemic has been especially hard for women, and remote work is making things more difficult. With people exulting over the benefits, we often forget to address the dark side of women working from home.

It has been found out that since lockdowns began globally in March 2020, around 20 million women have thought about leaving the workforce in corporate America. Even though women may be more likely to work from home than men, they usually have a harder time doing so.

This paradox is a result of women juggling between their jobs and also their domestic chores such as looking after their husbands and children. Besides, work from home has added more pressure on leaders and employers to navigate the obstacles to workplace equality in the virtual office. The pandemic has not only made things harder for women, but it also stalls the progress towards workplace equality and has increased inequalities that have affected women’s careers for decades.

The Dark Side of Women Working From Home

Many problems explain the dark side of women working from home. Let’s take a look at them!

1. Juggling between work and life

Undoubtedly, there are several benefits of work from home that benefit men and women alike. These include removing the daily commute factor, control over working hours, and added flexibility. Thus, it may seem as if the pandemic allowed for a healthier work-life balance. However, things are quite different in reality.

Women face the negative effects of work from home by the virtue of them women. Studies show that women are more likely to carry out their domestic responsibilities while working from home, while men in the same scenario can prioritize their work over everything else.

For women, it appears as if their unpaid overtime hours have increased. Women who work from home do have more control over their schedules. But when mothers who are also professional women work from home, they don’t. Working from home challenges every person who serves two roles, one is of the employer, and the other of a parent. Therefore, women have lost control over their work-life balance.

Every working woman has dealt with the problem of being held to higher performance standards as compared to their male counterparts. Bias in the workplace exists. Women are generally held to be more accountable in the workplace. This also slows down their progression through the corporate ranks. Women who work from home are subjected to stricter standards and more accountable. This makes it more difficult to lead a professional life while still juggling domestic responsibilities.

3. Home is the primary place of anxiety

Another dark side of women working from home is that, for women, home is the primary site for anxiety. There are many logistical problems associated with remote work that isn’t addressed. In most households, especially, where women work from home in India, there aren’t enough rooms. The majority of middle-class families have two-room houses. In which case, one room is occupied by the children, and the other by the man of the house. Where will the woman work from?

Apart from this, in a house, unpredictable circumstances can affect the performance of female remote workers. What happens if someone rings the doorbell? What happens when the children interrupt? What if the husband wants a cup of tea? There are thousands of situations like these. Women have to assume responsibility for each of them. There is no privacy in the house. Hence, the home becomes a site and source for anxiety.

Another bane of remote work is that, since the work schedules are flexible, and working hours undefined, women have no time for themselves. This may result in them working overtime without pay.

In a work-from-home situation, deadlines are typically flexible. Therefore, a woman might spend the day taking care of her household responsibilities and work late into the night to finish her assignments. This is highly stressful and leaves them with no free or leisure time.

Modern-day corporate workplaces are run through informal networks that determine critical assignments. Statistics women work from home show that in remote work, women find it harder to get career benefits that are usurped by male employees. Work from home accelerates the underlying workplace inequalities.

For example, if there is an important assignment in the workplace, it is given to the man instead of the woman. This is because it is assumed that the woman will be burdened by her domestic role and won’t be able to deliver the project as well as the man would. This is how women are left behind in the corporate ladder even if the company has gone remote.

6. Striving to forge a virtual presence

Even in a physical office space, women employees have a hard time making themselves seen and their voices heard. Subsequently, women are not considered when there is a vacancy for a higher-level position. A cultural bias exists where we see men as the leaders of the company, and rarely the women.

In remote work, women have a hard time forging their virtual presence. According to a study, 45 percent of female business leaders have reported that women find it difficult to speak up in virtual meetings. Oftentimes, the voices and opinions of the female employees are ignored deliberately. It may seem unfair, but it is a pretty common scenario even in 2021.

7. Ending dark side of women working from home

These were some problems that account for the dark side of women working from home. In the end, it is the leaders’ responsibility of making remote work successful for all. Risks of work from home have to be identified and mitigated. With the right leadership, the potential of work from home can be realized. But, for that to happen, employers must acknowledge the problems we have discussed.

Also Read: How To Be A Super Mom By Working From Home