Can Body Hair Be Beautiful? 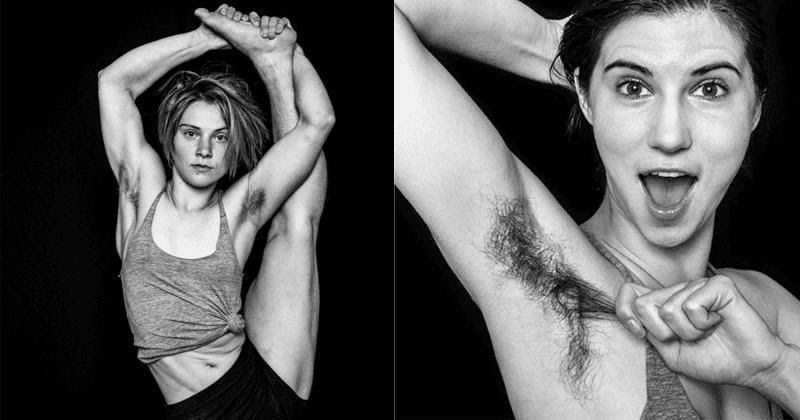 With COVID-19 and the lockdown, body hair positivity is peaking at an all-time high. With women fearing salon visits, the female body hair is being normalized. Although unfortunate that it took a pandemic to accept that women too can be hairy, like their male counterparts, nevertheless it’s never too late to start. Let’s look closely how the women body hair was stigmatized throughout centuries.

History records that body hair did not bother our forefathers: the ones who lived in caves, clad in animal skin and leaves. Since then, humans have evolved as a race. They learnt about mannerisms and sophistication. With their sophistication evolved the denial of naturalism and the ruthless and expensive hair removal procedures. However, the men and women of the stone age did use sharp stones to scrape the hair off their heads to prevent frostbites.

While waxing was introduced by the J. sisters in 1987, the ancient Egyptians and the Mesopotamians were way ahead of their time. Legend has it that the Egyptian men and women used pumice and seashells and even beeswax and sugar-based waxes for smooth hairless skin.

The Roman and the Greek statues and their chiselled anatomy highlight the obsession with hairless skin as early as the mid-7th century BCE. For them, hair removal signified class, but only for women. On the other hand, men wore their body hair like the way they wanted.

Although the practice of shaving perpetrated the European women much later during the Elizabethan age, they only took to shaving their brows. The female body hair removing practice was popular amongst the upper-class socialists only. However, in the first decade of the 20th century, when sleeveless dresses came in vogue, the society decided that hairless armpits go the best with those outfits.

In 1915, Gillette came up with the first razor for women: Milady Decolette. It added to the rise in consumerism and the thrill amongst the middle-class women to imitate their upper-class contemporaries. By 1917, Gillette had already sold one million razors, and thus, started the normalizing of body hair removal for women.

Gillette is definitely responsible for the rise in body hair removal procedures by women. Soon, body hair was looked down upon as ‘gross’ and ‘dirty’. What is often ignored is the fact that hair removal can be expensive and may not be affordable to all. In 2013, according to a survey by Mintel, it was found that 95 per cent of women between the age of 16 to 24 remove their underarm hair; and, close to 92 per cent shave their legs.

The stigma that society has ingrained in young girls about women’s body hair is unfortunate and dangerous, to say the least. Often, stories of underaged girls being bullied in schools are heard. While body hair depends a lot on hormones, some are meant to be hairy and some lesser than others. Often, young girls are called names or, compared to animals for being hairy. It also highlights the need for body hair positivity being taught to these young children.

By the end of the 20th century, science had already developed a permanent solution to get rid of body hair. In 1996, MIT graduate Richard Rox Anderson discovered that laser pulses can damage hair follicles permanently and prevent hair from growing back again. The following year, the FDA approved the first laser treatment for permanent hair removal. By 1999, Laser hair removal becomes the third most popular cosmetic procedure in the United States.

The destigmatization of female body hair saw its way through society in 1999, when Julia Roberts made a public appearance proudly wearing her armpit hair. It sent waves of admiration and gasps of disgust amongst men and women alike. It was the first step at normalizing body hair in our stigmatized society. However, it did not change much.

Back home, hair removal brands have begun remodelling their campaigns to suit the narrative of women empowerment. It was propagated by women who claimed that a clean smooth hairless skin boosted their confidence. Soon, hairless skin became an epitome of empowerment; and hairy, a sign of under confidence.

In 2015, Miley Cyrus bared her unshaven armpits on Instagram, which influenced women and girls to take up the #armpithairdontcare challenge and trend it across social media. In the following year, Mintel surveyed that more women were accepting their body hair.

Mintel found that 77 per cent of women between the ages of 16 and 24 were removing their armpit hair and only 85 per cent were shaving their legs.

While women were rejoicing the growing acceptance towards body hair, 2017 had a different story to tell. When model Arvida Bystrom appeared with unshaven legs in an Adidas campaign, she was at the receiving ends of rape threats on social media. Clearly, it demarcates how the cosmetic industry which is nearing a billion dollars caters to the masculine gaze, instead of actually empowering women.

Thanks to Miley and her eccentricities, even amidst all the backlash, she has taught women how to not only wear the hair with pride but also groom it. Instead of shaving their armpits, women sometimes choose to glitter bomb them or dye it the way they want.

For a millennium, women have been told that body hair is not beautiful. Maybe, if Marilyn Monroe had revealed hairy legs when her skirt flew up in The Seven-Year Itch or, Pamela Anderson swayed by the beach in slow motion exposing hairy limbs, the change would have come a bit earlier.

To keep or, not to keep that hair? It is a personal choice

However, women are gradually shaving their body hair: be it their armpits or their limbs, lesser every year and showing how body hair can be beautiful, as well. However, flaunting body hair is a personal choice and women should be respected for whatever choice they make. The new beauty standard that the world is upholding is indeed body hair positive when it comes to women.

From Miley to Madonna, celebrities promote the idea of body hair positivity and honestly, it is endearing. The idea that the media has promoted when it comes to female body hair, over the years, can only be broken through with the help of famous icons. However, the good thing is, the society now aims to provide women an equal agency that men have: to keep or not to keep that hair.

Also read: Ways To Get Rid Of Body Hair Naturally