Try the Dazzling B-52 Shot: Recipe and Variations 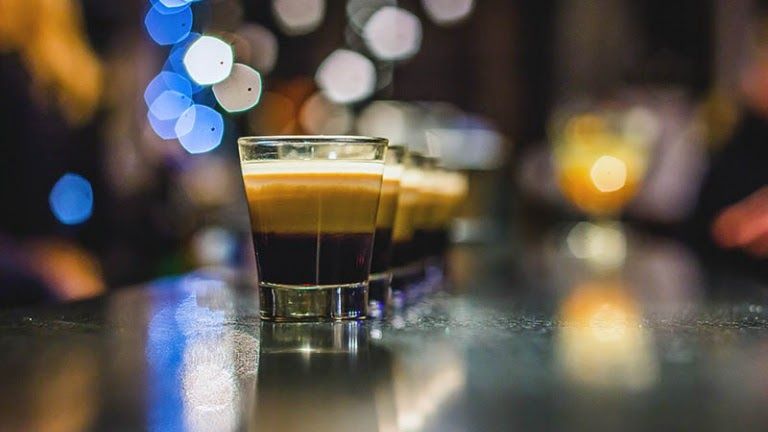 Everyone loves a good after-dinner drink, especially if it's a party. And the best drinks are those which capture your attention just by having a mere look at them because that is exactly what is going to make you want to have a taste as well! Behold, one of the greatest and the most attractive drinks of all time, the B-52 shot! Not only is it great in terms of how it looks, but it tastes amazing as well. This perfect after-dinner drink is going to satiate your palates like no other drink and the way it is made is going to intrigue you even more.

About B-52 Shot Drink

The B-52 cocktail is made up of three ingredients including coffee liqueur, Irish cream, and a Grand Mariner, with the ingredients layered distinctly. The drink is divided into three different layers because of the relative densities of the ingredients. And this is also the major reason why it is such an eye-catching drink. Compared to other drinks which are generally prepared with the help of shaking or blending, this drink is made in a rather traditional way, which is the handmade method. Although the origins of the B-52 shot are not thorough, it is said that the drink was first made in a hotel in Alberta, by a bartender named Peter Finch. He used to name drinks after his favorite bands and songs, and he did something similar to this one as well; he named the drink after the American band B-52s. The drink is usually served either in a shot glass or a sherry glass.

Although the B-52 cocktail only involves three ingredients, it still creates a wonderfully diverse taste, thanks to the versatility and compatibility of the ingredients. As soon as you drink it, you would instantly feel the first soft and creamy layer of the cocktail enveloping your taste buds and then the bitter yet refreshing flavors of coffee and orange take over, thereby creating a trance and greatly satiating your taste as well as your mind. And the crisp aroma of the drink only adds up to its popularity. The perfect infusion of the ingredients makes it extremely difficult to not like this drink, so this goes without saying, that it is a must-try.

Recipe and the Preparation of B-52 Shot

The B-52 drink is quite easy to make considering it only requires three simple ingredients. Here is the recipe and the way to make it:

Variations of B-52 Shot

There are many variations of the famous B-52 shot and these drinks are collectively considered as the B-50 series of layered cocktails. However, the most widely known variation of the drink is the Flaming B-52; as the name suggests, this version of the drink is on fire, like literally. For this, a heat-proof glass is required, but other than that, the method is pretty much the same; the three ingredients are carefully layered up in a shot glass. The only difference is that the top layer consisting of the mariner is ignited, which then produces a blue flame.

At times, the top layer does not get lit easily if it's at room temperature, so it is often topped up with some overproof rum which makes the former process easier. There are plenty of other variations of the drink. Some of them are:

Bombay gin is a clear and mildly sweet gin, which has a rather oily and thick palate. In the original B-52 cocktail, the fourth layer of Bombay gin is added to give the drink a floral and fruity taste which then creates the perfect combination of bittersweet.

This B-52 cocktail is pretty much the same, except for one ingredient. In this, in the place of Baileys Irish cream, Sambuca is used as the second layer. Sambuca liqueur is an Italian anise-flavored one and gives off a taste similar to that of licorice. And because licorice goes well with coffee and a hint of orange, it is used as an alternative ingredient in the variation of the original B-52 drink.

Here, the key ingredient being replaced is Grand mariner or Triple sec, in place of which, Amaretto almond liqueur is used. As the name suggests, it is an almond-flavored liqueur, however, its taste often varies as per the brand. So, it might give a sweet taste than a B-52 shot, or even a little bitter one, according to its brand.

In this version of the B-52 shot, one ingredient, i.e., the Baileys Irish cream is changed and instead of that, peppermint schnapps is used. The latter due to its liquid candy cane-like taste adds a hint of mint to the drink and makes it even more refreshing.

You heard that right, it's that huge! And because of its quantity, it is therefore served in an Old fashioned glass and not in a shot glass. So, shoot a goodbye to all your worries with the amazing B-52 shot, and let loose! But don’t forget to stay safe and not go overboard with your alcohol consumption; safety first!