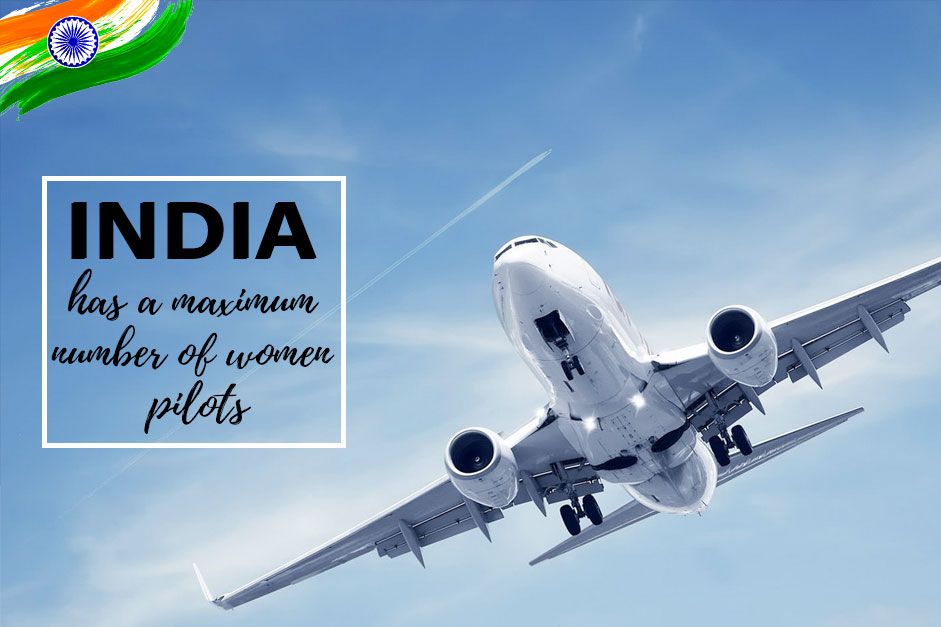 India, a nation which has efforted from end to end to be what it is today in the field of gender equality. A recent report on the human development index published by the UN shows how India has raised a level up from 130th to 129th rank in terms of gender equality! The above-stated fact is very well evident in the field of aviation of India as India has a maximum number of women pilots (commercial) as compared to other countries of the world. Isn’t this amazing?? Yes, it’s absolutely a matter of immense proud!

Even the so-called ‘developed countries’ like France and Japan are far behind India in the aviation field standing on 5.6 and 7.6% while the Indian flag flies high at 12.6%! And having achieved this even after being a developing nation is commendable! And the above-stated field is not as such a new genre for Indian women, it is something we Indians are habitual of and passionate for! This journey started right from 1936 when Sarla Thakral stepped in as the first woman pilot in aviation. At a tender age of 21, she flew Gypsy Moth catching people by utter astonishment.

Further, the Indian commercial airways sector saw Prem Mathur fly for Deccan Airways in the year 1947. Then, Indian Airlines proudly witnessed Durba Banerjee, as its first female pilot in the year 1956.And this journey hasn’t yet stopped and doesn’t seem to as such! Even today, such accomplishments swell Indian chests with proud. Recently, it was the first time when an all-woman crew led by Kshamta Bajpai, flew from Delhi to San Francisco on the 8th of March’2017. Having set a world record through this longest flight route led by an all-woman crew, they laid another milestone in Indian history!

It’s not that we achieved this quite like a child’s play, but it took us stringent management and sensitive incentives by all our representatives.

We hereby enlist some of the reasons how India soared that high in the field of aviation:

ARMAMENT PROTECTION:- After having witnessed the heinous rape at New Delhi in 2012, the government decided to provide all the women aero staff whether cabin crew or pilot with a guard as well as a pick and drop service if their duties were between 6 pm to 6 am. This was a big step but definitely a needful one. Aimed at making such jobs easy and convenient for women, it has definitely proved worthy owing to the new data of HDI.

WAGE INEQUALITY:- Aeronautical field is one of the most exceptional services that India has, where there’s no gender pay gap. Both genders are paid equally well. Whether it’s the beginner’s package of 4,00,000 or a senior’s package of 8,00,000, it is decided only on the norms of seniority and number flying hours they have served for. This equal pay incentive has made it a really desirous job for many.

MATERNITY LEAVE:- India is one of the rarest of the rare countries which provide a 26-week paid leave for maternity. Some other developed countries include the United Kingdom, etc. So, being a developing one, it’s a big affordability bundle that India has chosen to exhibit for its women!  Earlier, this time span was inclusive of just 12 weeks. It was only in 2017 when the Maternity Benefits Act was amended after which it became possible.

WORK HOURS FLEXIBILITY AND ALLOWANCES:- Standing tall at an average of 13.4% of women pilots on the global level, India is all welcoming for its women employees. Keeping them in mind the country has ruled work flexibilities like-‘like-‘crèches and office roles’ for non-flying pilots while they are pregnant, an additional allowance to make up for the loss in regular income, etc. With such great incentives and welcoming laws made for women’s welfare, it is no more amazement to see women soar high in the field of aviation!