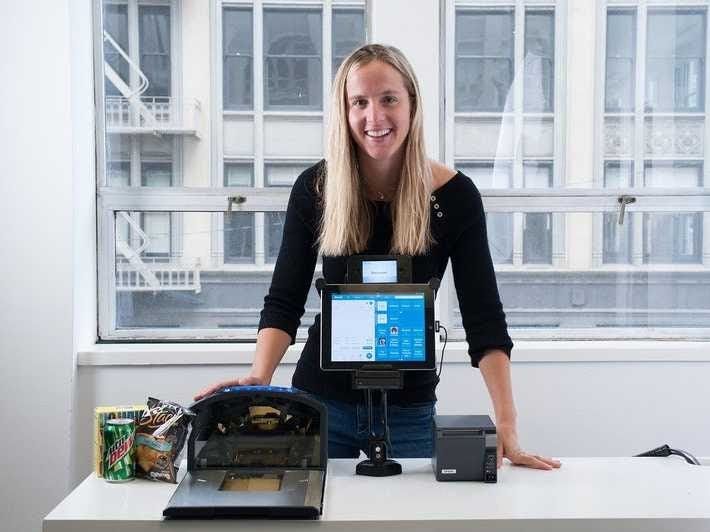 They say motherhood changes a woman, but it cannot be more true than for serial entrepreneur and the co-founder of Athena Security- Lisa Falzone. The birth of her first child fueled her desire to start her second venture and to create a safer world not only for her daughter but for every child out there. So, if someone tries to say motherhood is a hindrance to success and ambition, then you can show them a leaf out of Falzone’s life.

This Stanford alumna had started one of her earliest ventures, Revel Security System, in 2010. In just a period of 7 years, before she sold it to a private equity farm, Revel Security System had garnered over $ 200 Million dollars in venture capital and employed more than 750 employees across the globe, and had an enviable clientele- which included- Shell, Cinnabon, Quantas Airlines among others.

With Athena Security, the ace swimmer, Lisa Falzone, is treading treacherous waters and confronting one of the most significant problems of modern times, that has been much debatable in the USA- how to protect innocent citizens, especially students, from the menace of mass shooting?! Falzone envisions a future wherein a gun detection system would be as ubiquitous as a fire alarm.

The Voice of Woman is extremely humbled to provide its readers an insight into Lisa Falzone’s success mantra, the ideals of finding the right employee, and also learn more about the new offing from Athena Security- a device that uses thermal detection to stop the spread of coronavirus.

Read The Interview Of Lisa Falzone With VOW

Motherhood and career aspirations for women are often seen to be contradicting to each other- how has motherhood changed your perspective towards work and career? Motherhood fueled the mission for Athena Security. I wanted to help save students from the mass shootings we keep seeing in the news, not just for my daughter but for everyone else’s kids as well. You have successfully created two businesses, what has been your success mantra in life? A mantra I like is Teddy Roosevelt’s Man in the Arena quote (which I like to call Woman in the Arena): “It is not the critic who counts; not the man who points out how the strong man stumbles, or where the doer of deeds could have done them better.

The credit belongs to the man who is actually in the arena, whose face is marred by dust and sweat and blood; who strives valiantly; who errs, who comes short again and again, because there is no effort without error and shortcoming; but who does actually strive to do the deeds; who knows great enthusiasms, the great devotions; who spends himself in a worthy cause; who at the best knows, in the end, the triumph of high achievement, and who at the worst, if he fails, at least fails while daring greatly, so that his place shall never be with those cold and timid souls who neither know victory nor defeat.” I like this quote to remind myself to not be afraid to fail as long as I’m the woman in the arena.

1. Creating the Right Team can Contribute Immensely Towards the Success of an Organization- What are the Qualities you Look for in an Employee?

I look for a proven history of results, but also for the right attitudes. I look for driven people who have a sense of urgency to move quickly and work hard and honestly to make the world safer.

2. What is the Most Challenging Aspect of Starting a New Business?

Everything about starting something from the ground up is challenging, but especially finding your own inner voice in what you’re doing and battling the negativity you’re feeling internally that makes you think you won’t succeed.

3. Mass Shootings Especially in Schools and Public Places have Now Become Commonplace, as the Co-Founder of Athena Security, What are your Views on This Pressing Matter?

We need to stop it, that’s why I started this. I was seeing these mass shootings continue to affect our children and Congress was unable to do anything to stop it, so we wanted to do what we could with the technology we have to make the world safer for our children.

4. The Pandemic has led to Massive Job Losses, Which can in Turn Trigger Violent Outbursts- How can the Citizens Keep Themselves Safe?

5. Women are Known to be Protective, Yet Traditionally the Security Industry has been a Male Domain- Why do We still have such Deep-Rooted Gender Bias?

The security industry needs disruption, culturally, in diversity, and in technology. The gender-bias is deeply entrenched in the industry and it hasn’t been disrupted because they don’t like newcomers or innovation in any respect. In an industry that needs innovation, we need people to disrupt it.

6. If There is one Thing about the World that you Could Change, What Would it Be and Why?

The world feels unsafe and I want to make it safer, so that’s what I’m trying to do with Athena – to do my part to make the world safer with technology.

7. Your Company is using Thermal Imaging to Restrict the Spread of Coronavirus- Could you Tell our Readers More about This?

When COVID-19 started, we saw another opportunity to use technology to protect people – this time with our thermal cameras. Our cameras are touch free and automated, making the temperature check process much more hygienic and efficient than hand held systems. Our systems flag those with high temperatures and direct them to a secondary check with a medical thermometer to eliminate false positives. Our systems use a black body or HSRP that allows the system to adjust automatically to changing room temperatures, without having to be reconfigured.

There are systems on the market that don’t use HSRPs and it’s much more difficult for those systems to give an accurate temperature reading. Our technology is not a catch-all solution, but just like masks and social distancing, it can significantly decrease the spread of this disease and save lives. Please share a message for the readers of The Voice of Woman. I would say to the readers of The Voice of Woman to get out there and to do what you can to make the world a better place. We need more people that are trying to disrupt industries and make a change, so don’t let what is already out there deter you.